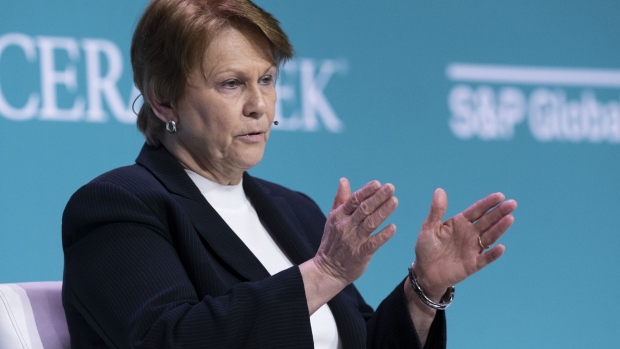 (Bloomberg) -- Subscribe to Zero on Apple, Spotify, Google, and Stitcher.

US oil giant Occidental Petroleum Corp. and Canadian startup Carbon Engineering Ltd. are preparing a site in the Permian basin in the US for a plant that will draw down 500,000 tons of carbon dioxide per year.

That’s according to Vicki Hollub, chief executive officer of Occidental. The ground-breaking ceremony for the direct air capture plant — slated to be 120 times larger than the world’s largest facility using similar technology — will happen on Nov. 29 and commercial operations are expected to begin at the end of 2024.

Hollub joined Bloomberg Green’s Zero podcast to discuss how Oxy (the company’s stock ticker and nickname) plans to reach net zero by 2050, including its goal of negating emissions from customers burning the oil and gas it extracts. Most of Oxy’s competitors in the US have climate targets that exclude customer emissions, which can make up more than 80% of the company’s total.

On the podcast, Hollub also discussed Oxy’s plans to focus more over time on carbon capture and sequestration versus exclusively fossil-fuel extraction. The company will be heavily relying on carbon-capture technology that traps emissions from industrial sources or from the air to be buried deep underground.

To fund its transition, Oxy is betting on revenue from offsets. Global corporations in the throes of establishing climate plans are seeking credible offsets to manage their carbon balance sheets, but there’s a more limited supply of carbon-removal offsets than there are for projects like forest protection and renewable energy that simply avoid emissions.

Oxy is also counting on the sale of “net-zero oil” that it plans to produce by injecting more CO2 into oil reservoirs than is emitted by the process of extracting and burning the oil. The process, called enhanced oil recovery,  pushes out more oil from reservoirs than other techniques. For now, Oxy only uses CO2 from underground mines rather than the excess CO2 in the atmosphere or the emissions from industrial sources. But switching up those sources, if done right, could result in a climate gain rather than the climate harm being caused today.

This is an edited version of highlights from Zero’s interview with Hollub. You can listen to the full conversation below, and read the full transcript here.

Akshat Rathi: When did you first think that becoming a company that injects carbon dioxide more than it extracts fossil fuels is the way to be a part of the energy transition?

Vicki Hollub: Back in 2011, we did a review of our oil and gas assets. We realized we didn’t have access to enough CO2 to fully develop the oil reservoirs we had. Using anthropogenic [human-generated] sources of CO2 was one way in which we could continue generating incremental oil production. This way it became evident that we can not only generate net-zero oil as we take CO2 from the air or industrial sites, but also help the world.

Akshat Rathi: When will you have the first shipment of net-zero oil through carbon capture?

Vicki Hollub: I can’t tell you that right now. There is currently more interest in taking the CO2 and just sequestering it rather than doing enhanced oil recovery. Corporations need CO2 offsets because they have net-zero goals. So we’re taking the best decisions for advancing the technology. Ultimately, I believe that putting COO2 in a saline reservoir is a waste of a valuable product. It’s something we should not do on a large scale. It’s missing an opportunity to produce net-zero oil.

Vicki Hollub: Particulate matter pollution certainly needs to be addressed but I think it’s a lower source in my view of what could be causing health issues.

Akshat Rathi: Overall climate, if we don't address, it will be bigger problem for health eventually. But outdoor air pollution currently kills 4.5 million people each year.

Vicki Hollub: Most of it from coal though.

Akshat Rathi: It’s also oil. A young child died in London and after an inquest the cause of her death was determined to be air pollution from cars.

Going back to carbon capture. If Oxy becomes a net-zero company in 2050 as you’ve committed, how much revenue will come from extracting carbon and how much from injecting carbon?

Vicki Hollub: If our plans work, we’d like our revenue from carbon capture to be equal to oil and gas revenues. We believing using CO2 for enhanced oil recovery and generating net-zero barrels is the way. The last company standing that produces the last barrel of oil should do so from CO2 enhanced oil recovery.

Read the full transcript of this episode. Check out more episodes of Zero, and subscribe on Apple, Spotify, Google or Stitcher to hear new episodes every Thursday.

--With assistance from Kevin Crowley, Christine Driscoll and Oscar Boyd.