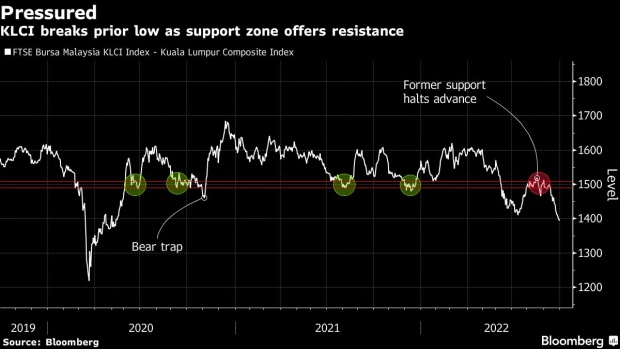 A person looks at stock prices displayed in the trading gallery of the RHB Investment Bank Bhd. headquarters in Kuala Lumpur, Malaysia, on Tuesday, Feb. 17, 2020. Malaysia is restricting people's movement nationwide to limit the spread of the coronavirus. The country is banning all visitors, and residents are barred from traveling overseas while places of worship, schools and business premises will be shut except for markets that supply daily needs, Prime Minister Muhyiddin Yassin said in a televised address late Monday. Photographer: Samsul Said/Bloomberg , Bloomberg

(Bloomberg) -- Malaysia’s upcoming budget will bolster consumer staple companies with the government expected to increase spending ahead of a general election, while doing little to stem foreign outflows.

With this being Prime Minister Ismail Sabri Yaakob’s last budget before going to the polls, investors including BNP Paribas Asset Management and Areca Capital expect to see a populist plan that could involve cash handouts, which should benefit consumer staples companies.

Foreign funds have cut their holdings in Malaysia’s $332 billion stock market for 14 straight days up to Oct. 3, the longest streak since Dec. 2021, according to Bloomberg data. That’s brought the main KLCI index to the brink of a bear market before the presentation of next year’s spending plan on Oct. 7.

Here’s what some market participants are expecting from the budget.

“The market consensus view on Budget 2023 is that it will be a populist one, with more focus on targeted subsidies, targeted tax cuts for the B40 (bottom 40% income earners) and likely silence on the GST implementation.”

Bringing budget forward “has also brought forward consensus expectations of a General Elections being called earlier (by Q4 2022) rather than later,” he added.

“We think that the contours of the Budget 2023 will tell us more of how the incumbent Government is reading the sentiment on the ground.”

Wong also hopes that the Prosperity Tax that was imposed this year will stay as a one off measure.

“Sector-wise, bright spots will be banks, consumer staples companies with healthy balance sheets, electrical and electronics (E&E) exporters and materials players that have cost advantage over its global peers.”

“We look forward to seeing a people-friendly budget with some incentive for economic recovery.”

The budget is likely to focus on job creation, recovery from Covid-19 and at increasing the income of households, he said. Investors should expect more measures and assistance to help lower income group to counter the adverse impact of inflation, he added.

Sectors to benefit include tourism and consumer.

“There is high anticipation that the government will dish out more goodies than usual to create a ‘feel good’ effect as it will be its last Budget before the 15th General Election.”

History also suggests that the odds for big gains immediately after the presentation of the budget are light. Over the past 13 years, the probability of the KLCI delivering a positive return one week after the budget has been about 46%.

The construction sector may benefit from potentially higher development expenditure even as budget may not announce new mega projects beyond those approved in the past six to 12 months. Top picks in the sector include Gamuda and IJM Corp.