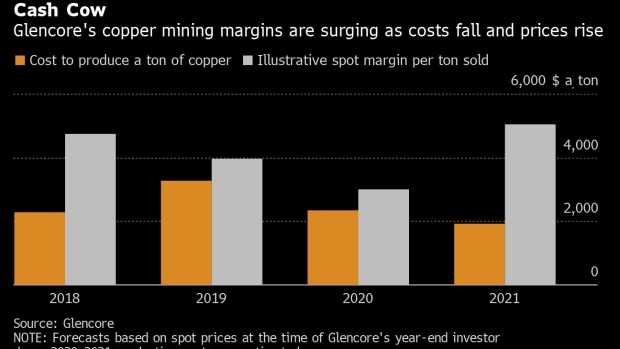 (Bloomberg) -- The world’s biggest copper miners are enjoying a rare bonanza, helped along by fallout from the coronavirus pandemic.

That comes as copper reaches seven-year highs, currencies in major producing nations tumble, and low oil prices keep a lid on costs. The unusual combination of falling costs and rising prices is also boosting the shares of copper miners, which show little inclination to increase supply into a tight market.

That heady mix is yielding Glencore Plc’s biggest dollar margin since it started releasing consistent breakdowns three years ago, and possibly the highest since its takeover of Xstrata in 2013. The company’s copper department looks set to make more than $5,000 on each of 1.1 million tons it expects to produce next year, it told investors last week.

Freeport-McMoRan Inc., the world’s largest listed copper miner and a top gold producer, has jumped almost 90% this year after almost a decade of largely downbeat investor appraisal. Surging free cash flow could see the shares rally another 40% from a six-year high, according to Jefferies.

The investment bank sees a further 60% gain for First Quantum Minerals Ltd., following its 55% advance this year. Diversified miners, such as Glencore and Anglo American Plc, have also rallied, with investors focusing on companies offering the greatest leverage to an upturn in prices.

“The bullish narrative is clearly gaining traction with investors, including those who had been skeptical a few months ago,” Jefferies analysts including Christopher LaFemina said in an emailed note.

What’s less clear is whether miners can capitalize further by boosting output. With the pandemic raging and a cost-conscious mindset still firmly in place, they may be even slower to react than in previous booms.

While Anglo and Rio Tinto Group are developing major mines, the industry remains cautious after huge blowouts during the last commodities super-cycle. It’s a discipline Glencore intends to maintain, even as some analysts forecast $10,000 copper.

“Let’s not develop them and oversupply into a market,” Glasenberg said.

First Quantum’s Director of Strategy Tristan Pascall concurs, and identifies another curb on new projects: declining ore grades that make copper more costly to extract. “There are smaller opportunities out there that are high-grade, but they are few and far between,” Pascall said.

Exploration investment has dropped 10% this year, suggesting miners are still gun-shy about development, according to Michael Widmer, head of metals research at Bank of America Merrill Lynch.

“The risk of any meaningful supply increases is relatively limited,” Widmer said.

With oil and some producer-nation currencies bouncing back, miners may also be questioning how long the combination of high prices and falling costs can last. The Australian dollar has rallied strongly from a trough seen in March, raising local input costs and eating into miners’ margins.

But in Chile, where copper prices are trading at record highs in local-currency terms, mineworkers are keen to get a share of the profits in the world’s top supplier.

“There’s no excuse at all for workers not to get what they deserve,” Luis Redlich, president of one of the main labor unions at Antofagasta Plc’s Centinela mine, said in an interview.