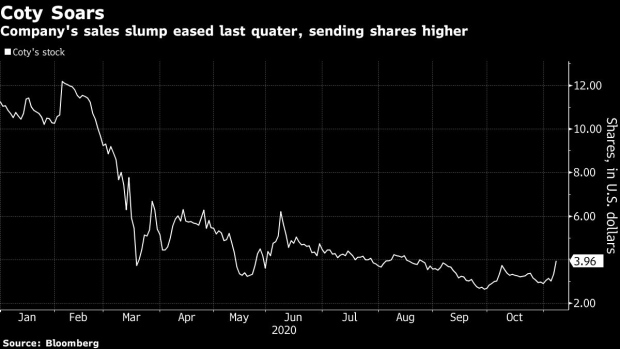 (Bloomberg) -- Coty Inc. soared after the maker of Covergirl and Sally Hansen reported sales declines that abated from the previous quarter.

Revenue excluding the company’s Wella business, which is being sold, fell 20% to $1.1 billion in the quarter ended Sept. 30. Including Wella, the decline was 13%, compared with a drop of 56% in the previous quarter.

Chief Executive Officer Sue Nabi, who took over in September, comes aboard as the New York-based company reshapes its business to meet rapid changes in consumer tastes amid the global pandemic. Despite the contraction, she said recent changes, such as focusing on e-commerce, have better prepared Coty to weather the storm.

“A stronger Coty has emerged in the past quarter,” Nabi said in an interview. “There are a lot of green shoots here.”

The shares rose as much as 24% to $4.15 in New York trading on Friday, marking the biggest intraday gain since April.

Coty is trying to win back investors that have fled during the pandemic and sent the company’s stock down 70% this year through Thursday. Citigroup analyst Wendy Nicholson recently wrote that there’s no “quick fix” to the company’s challenges, which include weak market share and too many recent CEO changes.

The company reported revenue declines across its three geographic regions, with the Americas posting the smallest drop. Coty singled out Kylie Jenner’s line of products as helping to prop up results there. The Asia-Pacific region, which represents the smallest market for the company, posted the biggest decline, with the company citing a slump in travel-related sales.

Coty’s Asia sales contrast with results at competitor Estee Lauder Cos., which earlier this week said that revived Chinese tourism has helped to strengthen demand in Asia.

Nabi has brought on new hires to re-ignite growth. Last month, Coty said L’Oreal veteran Isabelle Bonfanti will take over as chief commercial officer of luxury. She’s entering the role with experience in developing skin-care and makeup brands in Asia. The company also named Jean-Denis Mariani as chief digital officer -- the same role he had at an LVMH-owned brand.

Coty is prioritizing the fast-growing skin-care market, which has grown this year while makeup and color cosmetics lose ground.

The company is also raising the stakes on its $200 million bet on Kim Kardashian West’s color cosmetics, with Coty working with the reality TV star to develop skin-care products. Nabi said the company will offer both the Kardashian and Jenner brands direct to consumers, although the timing remains uncertain.

“We are working on a Kim Kardashian West skin-care line,” Nabi said. “Coty owns a lot of expertise that we’re going to stretch and spread across all of this portfolio.”