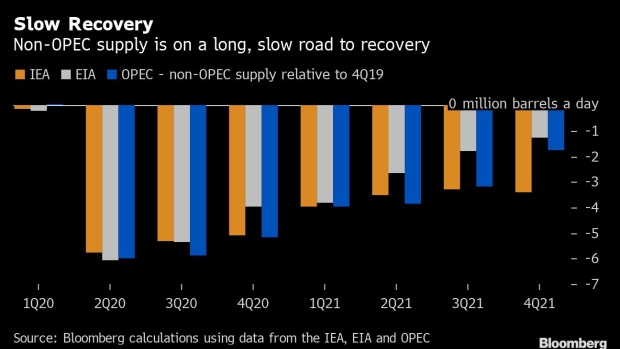 An employee walks past crude oil storage tanks at the Juaymah Tank Farm in Saudi Aramco's Ras Tanura oil refinery and oil terminal in Ras Tanura, Saudi Arabia, on Monday, Oct. 1, 2018. Saudi Arabia is seeking to transform its crude-dependent economy by developing new industries, and is pushing into petrochemicals as a way to earn more from its energy deposits. , Photographer: Bloomberg/Bloomberg

(Bloomberg) -- Surplus stockpiles of crude and refined products built up around the world during the depths of the Covid-19 pandemic still won’t be cleared by the end of next year, even if the OPEC+ countries stick rigorously to their output curbs. That’s the conclusion from the latest monthly reports from two of the world’s three big oil forecasting agencies.

The oil supply/demand balances from the International Energy Agency and the Organization of Petroleum Exporting Countries both indicate that, even assuming OPEC oil production at target levels through the remainder of this year and throughout 2021, global inventories will still be above the levels seen at the end of 2019 (see chart above). The size of the surplus ranges from 106 million barrels seen by the IEA to almost 500 million barrels in the OPEC forecast.

Of the three agencies, only the U.S. Energy Information Administration sees the pandemic stockbuild fully eroded by the end of next year, but it, too, is moving closer to seeing a surplus. A month ago it saw stockpiles in 4Q21 almost 820 million barrels below the 4Q19 level, now it sees a deficit of just 350 million barrels. All the agencies had a more bearish view of stockpiles than a month ago.

The difference in the views of the three agencies comes from their outlooks for the first half of next year, when the EIA sees much bigger stock draws than either of the other two agencies (see chart above).

The bigger stockdraws come despite the EIA getting more pessimistic about the recovery in global oil demand. The U.S. agency has cut its forecast of global oil consumption next year by 570,000 barrels a day from the level it foresaw just a month ago. OPEC has made an even bigger reduction of 770,000 barrels a day to its view of demand. The IEA, in contrast, restricts its pessimism to the forthcoming final quarter of 2020 (see chart below).

While its demand outlook is darkening, the EIA sees non-OPEC oil supplies recovering faster than either the IEA or OPEC over the remainder of 2020 and throughout next year. By the final quarter of 2021 it sees total non-OPEC supply just 1.26 million barrels a day below the 4Q19 level (see chart below). That’s in stark contrast to the IEA, which sees non-OPEC output still running 3.4 million barrels a day below the end-2019 level.

The slowdown in the pace of demand recovery from the depths of the Covid-19 pandemic has darkened the outlooks from all three of the major agencies. If it weakens further, the EIA may soon joint the other two agencies in forecasting the stock surplus to remain beyond the end of next year.