Canada is being 'aggressive' in talks to acquire COVID-19 vaccine candidates: Procurement minister

One of the world’s fastest-moving efforts to develop a COVID-19 vaccine is falling behind rivals, its advance appearing to be stymied by political tensions between China and Canada and concerns its shot may not work as well as others.

CanSino Biologics Inc., the Chinese company which in March started the world’s first human tests on an experimental coronavirus shot, has yet to start administering shots in critical final-stage trials on the vaccine it developed with the Chinese military. Meanwhile, rivals like U.S.-based Moderna Inc. and Britain’s AstraZeneca Plc as well as China’s Sinovac Biotech Inc. and Sinopharm are well into this last phase of testing, giving test inoculations to thousands of people to find out if they work.

With its progress toward Phase III trials trailing major competitors, CanSino hasn’t had the opportunity to assuage concerns from earlier-stage data, which showed the immune response generated by its shot varied greatly among participants. Its setbacks offer a look at both the scientific and political incertitudes companies are battling as they race to produce a vaccine against the virus that has already killed more than 850,000 people worldwide.

Just a few months ago, the Tianjin-based biotechnology firm was positioned at the vanguard of global vaccine trials thanks to a partnership with the Canadian government’s main research agency, which permitted the company to conduct tests in the North American country. CanSino was supposed to send its vaccine candidate -- Ad5-nCoV, developed with Canadian technology -- to Canada so that final-stage tests could begin there as early as in the fall. The vials never arrived.

Chinese customs hasn’t approved shipments of CanSino’s vaccine to Canada, the National Research Council of Canada said in an Aug. 26 email. The development appears to be part of a pattern of retribution against Canada since it arrested Meng Wanzhou, the chief financial officer of Chinese telecom giant Huawei Technologies Co., on a U.S. handover request in December 2018. In recent months the relationship between the two countries has only worsened.

Guy Saint-Jacques, a former Canadian ambassador to China, said it’s clear the blocking of CanSino’s vaccine to Canada isn’t just a bureaucratic glitch because the company appears to have shipped to countries friendly to China.

“This is part of China’s COVID-19 diplomacy,” he said. “It’s unfortunately part of the overall difficulties we’re having with China.”

For CanSino, international collaboration is vital because late-stage trials require large-scale testing in place where there is an active outbreak, something no longer possible inside China, which has largely stamped out local transmission.

With Canada as a trial site now in question, the company has had to look elsewhere.

After telling the Hong Kong Stock Exchange that it hadn’t started enrolling participants for Phase III trials as of Aug. 18, CanSino said Wednesday it has entered into an agreement with NPO Petrovax Pharm LLC to to conduct a trial in Russia. CanSino declined to comment further when contacted earlier for this story.

Petrovax told Bloomberg at the end of August that it plans to recruit 625 volunteers in eight medical institutions in Russia, and that the selection and vaccination of volunteers will be carried out by the end of September. In the statement Wednesday, CanSino said it and Petrovax have received approval for Phase III clinical trials.

Since Meng’s arrest, China has jailed two Canadians on espionage charges, halted billions of dollars in Canadian imports, and put four other Canadians on death row. Further denting relations between Beijing and Ottawa, Canada also suspended its extradition treaty with Hong Kong in response to a new security law imposed there by China.

China’s General Administration of Customs didn’t respond to a request for comment. In its email, the National Research Council of Canada said that while the CanSino-Canada partnership had been reviewed earlier by the Chinese government, after it was signed Beijing introduced changes regarding the export of vaccines. Canada was ready to begin preliminary trials in June but, due to the delay, the research council is turning its focus to other partners, it said. Canadian Prime Minister Justin Trudeau described the developments on the CanSino vaccine as “unfortunate.” 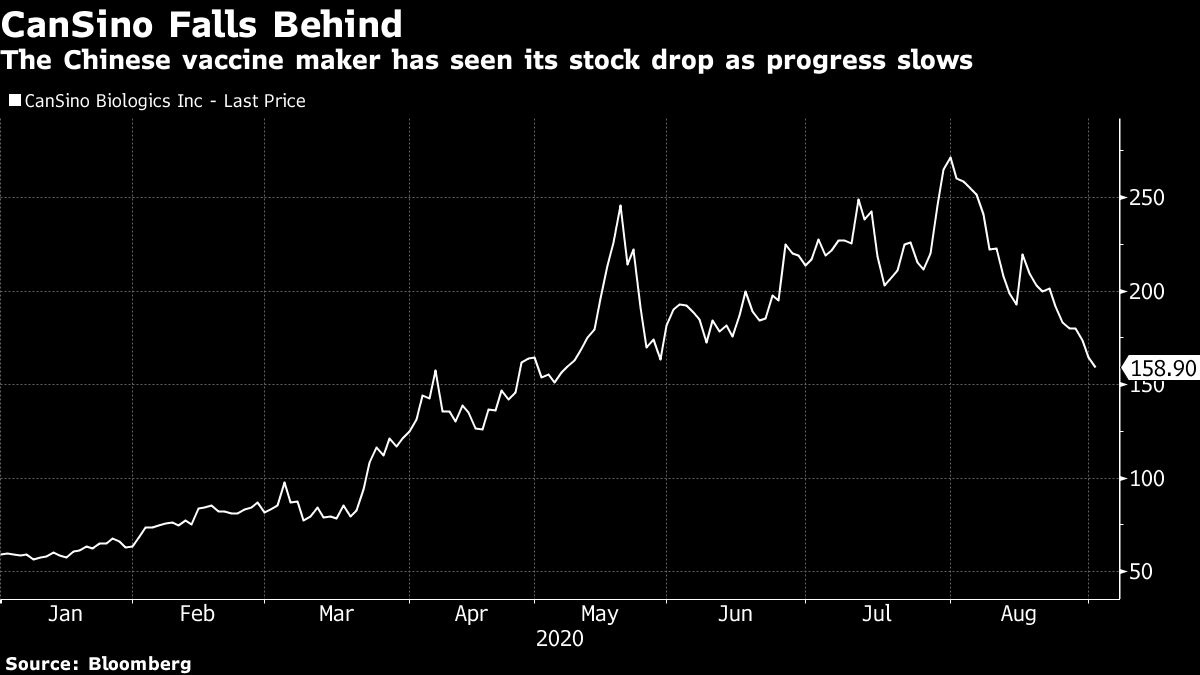 After hitting an all time high of HK$271.4 on July 31, CanSino’s stock went on a steady decline in August, shedding nearly 40%, as news emerged that the vials it was supposed to ship to Canada for trial never left China. The stock fell as much as 11% on Wednesday before paring losses after CanSino’s statement on the Russia trial. It is still up more than 150% since the beginning of this year.

CanSino has had other struggles. With most of the vaccine frontrunners now having published their early human testing data, there have been some concerns that the antibodies triggered by CanSino’s shot as part of a vaccine-induced immune response could be lackluster compared to those stimulated by rivals, said Brad Loncar, chief executive officer of Loncar Investments in the U.S.

That could well be why the company has appeared slow in striking deals with countries to run phase III trials, said Loncar, who has holdings in the Chinese vaccine developer.

“Of all the data that I’ve seen of companies that have published human stage data, I would say CanSino was one that I would be most nervous about the Phase III,” Loncar said. “The antibody levels in general, when you compare them to what other companies have put out there, like Moderna and Pfizer/BioNTech and even from the other Chinese vaccine makers like Sinovac and Sinopharm, I just think that the data hasn’t validated CanSino’s position as a frontrunner.”

While analysts have noted the varying standards used in measuring vaccine-induced immune response by different groups, CanSino suffers from one particular challenge: Its vaccine uses a genetically-engineered human adenovirus, which causes the common cold and to which a lot of people already have immunity. That preexisting immunity has shown to blunt the vaccine’s ability to generate the kind of antibodies that can bind to the spikes on the surface of the coronavirus to prevent it from entering human cells.

Meanwhile, other Chinese vaccine makers are further ahead on Phase III trials. Beijing-based Sinovac has started vaccinating people in Brazil and Indonesia while more countries are signing up to be part of the company’s multi-center late-stage tests. State-owned China National Biotec Group is testing the two candidate vaccines it developed in the United Arab Emirates and has secured approval for further testing in Peru, Argentina and Morocco.

As for CanSino, in addition to the delayed Canada trial and its agreement with Russia, one of the company’s founders Qiu Dongxu said at a forum in July that the company is also talking to Brazil, Chile and Saudi Arabia on final-stage testing.

A large scale Phase III seeking to enroll 40,000 people is planned for Pakistan, according to an online clinical trials database. The trial has not yet started and will be headed by researchers from both China’s Center for Disease Control and Prevention and the Canadian Center for Vaccinology.

CanSino’s vaccine still warrants further testing since it isn’t yet known how strong an immune response the vaccine can shore up if it’s administered twice, a strategy that has been tested by almost all frontrunners but CanSino. Trials in Canada could potentially find out the effect of a booster shot -- if the vials ever make it to Canadian shores.