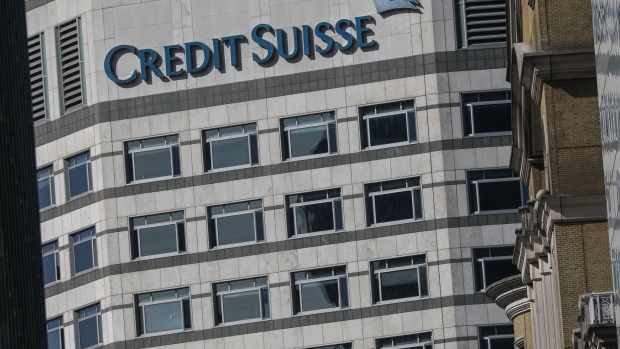 LONDON, ENGLAND - APRIL 06: A general view of Credit Suisse in the Canary Wharf business district on April 06, 2021 in London, England. On Tuesday the company announced that its chief risk officer and investment banking chief are leaving the company after it incurred heavy losses due to the collapse of the US hedge fund Archegos. Credit Suisse is also dealing with fallout from the collapse of Greensill Capital, a financial services company that originated $10 billion in supply-chain finance strategies that were run by Credit Suisse Asset Management. (Photo by Dan Kitwood/Getty Images) , Photographer: Dan Kitwood/Getty Images Europe

Credit Suisse Group AG was hit with a rare fine from a London employment court, which said the bank failed to properly inform staff about how it planned to proceed with a round of dismissals in the summer of last year.

The lender was fined 20,000 pounds ($27,380) -- the maximum amount possible -- by the U.K. judge, who said the redundancy consultation failures were “so extensive and so obvious” that he took the unusual step of issuing a penalty. The claim was brought by a former software developer in the bank’s quantitative analysis teams.

The Zurich-based bank didn’t inform staff in writing about the reasons behind the dismissals, nor the numbers of staff affected, Judge Barry Speker said in a ruling released earlier this month. The lack of information offered to staff then hindered any “meaningful” consultation that could have avoided or lessened the impact of the dismissals, he said.

Credit Suisse’s lawyer had argued that the bank didn’t deliberately withhold information but instead wanted to keep the identities of staff confidential “until such time as they had been selected for redundancy,” according to the ruling.

“This is not a basis justifying failure,” the judge said. “There was indeed no justification on confidentiality grounds with regard to these failures.”

The judge said the penalty was merited given the fact that Credit Suisse had a “substantial and well-resourced” HR department.