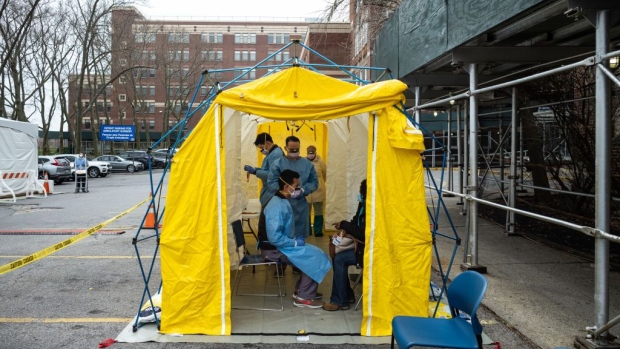 (Bloomberg Opinion) -- Crises reveal underlying weaknesses in social and economic systems. Although disruptive, they provide opportunities to shore up those systems. The 2008-09 financial crisis revealed weak points in banks, the financial system and the mortgage market, all of which now are more robust than they were. The coronavirus crisis similarly is revealing weaknesses in different areas of society. Part of our job in navigating our way through this crisis is to make them stronger, creating the foundation for a more resilient world in the future.

When thinking about a crisis, our focus should be on what underlying fragilities existed that allowed the crisis to happen in the first place. With the financial crisis, several weak points were exposed. Banks took on too much leverage to juice profits and shareholder returns. Thin capital buffers worked out well in booming markets because it meant banks were able to make greater profits on a lower equity base. Once the economy slumped, though, those capital buffers proved to be insufficient to absorb huge credit losses, putting the whole financial system and broader economy at risk.

The financial system was also put at risk because some traditional banking activities shifted from banks and regulated financial exchanges to nonbank entities with less oversight and little or no collateral behind them. The credit-derivatives market boomed. When some of those bets went bad, because the collateral backing them largely didn't exist, financial firms weren't able to make good on their side of the bargain, leading to panic about whether any of those contracts could be relied upon.

In the housing market, mortgage-underwriting standards were loosened too much. Lenders made loans without adequate verification of borrowers' ability to repay, and borrowers took on more debt than they could afford on the assumption they would soon sell their homes for a profit. Many of the loans originated had interest rates that reset after a short period of time, making them unaffordable to the buyer. Many of these same loans were made with low or no down payment requirements. When the housing-market slump deepened and the Great Recession began, people lost their jobs, mortgages payments rose dramatically and because there was little or no equity in so many homes, soaring defaults and foreclosures saddled the nation's leading banks with huge losses.

Regulations and business practices were changed to at least partially address these issues in the wake of the crisis. Bank-capital requirements increased, and large banks now have to pass annual stress tests before they can return capital to shareholders. As a result, banks are not rushing to the federal government for rescue packages the way airlines and cruise lines are now. Regulations were put in place governing credit derivatives, curtailing their use. Mortgage-underwriting standards were tightened, contributing to the sluggish housing recovery during the past decade but also meaning that we're less likely to see the housing market strain the system in this crisis in the same way as a decade ago.

Now the coronavirus crisis is revealing other weak points in our society. The U.S. health-care system lacks the spare capacity to respond to a pandemic. Public-health agencies were too slow to begin taking action after federal funding cuts. Too many households and small businesses lack an adequate savings cushion, making it difficult for them to withstand a prolonged economic shutdown. Some large nonfinancial industries deemed systemically important have immediate liquidity shortfalls after just a relatively brief shutdown. State and local governments with balanced-budget requirements don't have the resources to fight a public-health crisis. Outsourcing supply chains to other countries can lead to shortages of essential goods.

In the acute phase of the crisis we find ourselves in there's not much time to do anything other than put out fires. But as things settle down we should work to address some of these fragilities. There may be nothing governments and companies can do to prevent the outbreak of viruses that have the potential to become pandemics, but with more robust systems in place they don't have to be as socially and economically disruptive.

It should also be a lesson that we shouldn't relax the regulations put into place after the financial crisis, something that some lawmakers have advocated. We've already seen a few cracks in the financial system in the early phase of this crisis, with the Federal Reserve having to backstop money-market funds -- which were supposed to be shored up by the Dodd-Frank Act of 2010. The severely adverse scenario stress tests that banks have to pass before being allowed to return capital to shareholders -- an 8.5% decline in real gross domestic product, a rise in the unemployment rate to 10% and a 50% decline in the stock market -- may have seemed outlandish a month ago, but now it's one that could come to pass in the next several weeks. If the financial system and mortgage market had the same vulnerabilities today that they had in 2007, the current crisis would be even more disruptive than it already is.

We're in for some hard times for at least the next few months. But if anything positive can come out of this crisis, let it be making sure that the next time we confront a pandemic, we're better-prepared to weather it.

Conor Sen is a Bloomberg Opinion columnist. He is a portfolio manager for New River Investments in Atlanta and has been a contributor to the Atlantic and Business Insider.