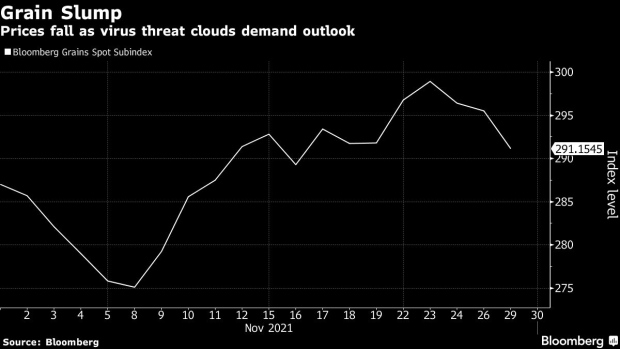 Most-active soybean oil and wheat futures both ended the trading day with the biggest drops since mid-August. Corn declined the most in nearly three months as equity markets slumped and crude oil slid.

Along with concern that the new coronavirus strain might slow economic recovery and dent the world’s appetite for grain purchases, Federal Reserve Chair Jerome Powell made comments about inflation no longer being viewed as “transitory.” That helped fuel the sell-off.

“It’s not new news that there are inflationary problems that are more persistent than the Fed believed earlier this year, but Powell’s confirmation of it today made markets nervous,” Farm Futures analyst Jacqueline Holland said.

The Bloomberg Grains Spot Subindex on Tuesday fell the most since early September.

The January contract for whole soybeans, which are crushed to make the oil, ended November with a seventh straight month of losses, the longest such streak since July 1989 amid concern about excess supply.

The most-active benchmark wheat contract slipped below $8 a bushel for the first time since November 10, with prices tumbling from the highest level since 2012 touched last week. The futures ended the day down 4.3% at $7.8725 a bushel.

Even so, wheat capped November with a sixth straight month of gains, the longest stretch since 2007, amid supply concerns. While Australia, one of the world’s top wheat growers, expects record production, the country also warns that heavy flooding has hurt grain quality. That means supplies won’t ease the global shortage of bread-making wheat as much as expected.

Corn futures for March settled down 2.5% to $5.675 a bushel. They ended the month with losses for the first time since August.