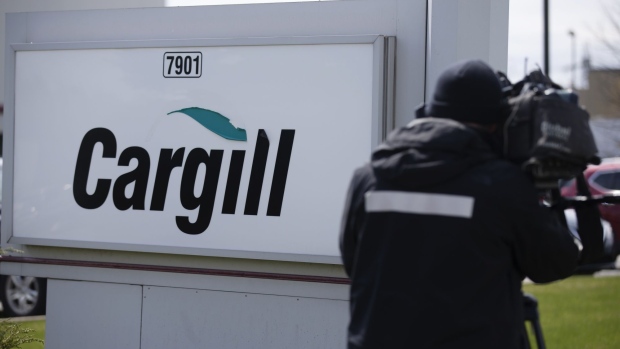 A member of the media films signage outside the Cargill Inc. meat plant in Chambly, Quebec, Canada, on Monday, May 11, 2020. The case-ready facility for beef, pork, chicken and sausage has shut down as the company is “concerned about the number of cases in the community and among our employees,” according to a May 9 statement. Photographer: Christinne Muschi/Bloomberg , Bloomberg

Commodity powerhouse Cargill Inc. has cashed in on booming agricultural markets with the most profitable year in its 156-year history.

The largest private U.S. company, which dominates markets such as corn, had almost US$5 billion in net income during its 2021 fiscal year through the end of May, according to annual financial reports seen by Bloomberg News. The profit boom shows the bonanza enjoyed by commodity merchants during the COVID-19 pandemic.

Cargill broke with a more than two-decade tradition of transparency in 2020 and stopped releasing its results publicly. It still shares financial results with its bankers, bondholders and others. A Cargill spokesperson declined to comment beyond saying the company will release its annual revenue on August 9, but not other financial information.

Cargill has profited from surging consumption of meat, corn and soybeans, particularly from China. The strong demand has sent agricultural markets skyrocketing, boosting profits for commodity producers and traders. What’s good for Cargill and its peers, however, is a headache for consumer goods companies and ultimately households, which face the highest food inflation in a decade.

The accounts show that Cargill delivered net income of just above US$4.93 billion in its 2021 fiscal year, up 64 per cent from the US$3 billion in fiscal 2020 and well above a previous record of US$3.95 billion set in 2008 at the height of the China-led commodity super cycle.

During the last fiscal year, the company reported sales of US$134.4 billion, up from US$114.6 billion a year earlier. The company enjoyed a sales-to-profit margin of almost 3.7 per cent -- large for a commodity trader.

The profit boom vindicates the strategy of Chief Executive Officer David MacLennan, who has sold under-performing businesses and bet heavily on demand for proteins such as beef, chicken and fish since taking over in 2013.

With some 155,000 employees across 70 countries, Cargill is the “C” in the vaunted ABCD group of merchant companies that have dominated grain trading for a century. Archer-Daniels-Midland Co. is the “A,” Bunge Ltd. is the “B,” and Louis Dreyfus Co. is the “D.”

Cargill, which counts 14 billionaires among its ruling circle, is owned by the heirs of William Wallace Cargill, who founded the company in the American Midwest. On top of the family owners, senior management and other employees control a small stake in the company.