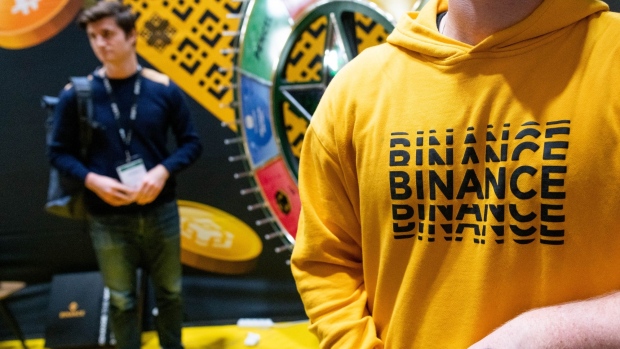 The booth of the Binance cryptocurrency exchange at the Paris NFT Day conference in Paris, France, on Tuesday, April 12, 2022. Paris NFT Day is part of the three-day Paris Blockchain Week Summit that brings together the brightest minds, business professionals and leading investors in the blockchain industry, according to the event's organizers. Photographer: Benjamin Girette/Bloomberg , Bloomberg

(Bloomberg) -- Binance Holdings Ltd., which is an equity investor in Elon Musk’s deal for Twitter, is forming a team to look at ways that blockchain and cryptocurrencies could help the social-media platform.

The world’s largest crypto exchange appears to be seeking an active role in how Twitter is run, after on Friday confirming that it had made an investment as part of Musk’s takeover of the platform.

“Binance is creating an internal team to focus on ways that blockchain and crypto could be helpful to Twitter and actively brainstorming plans and strategies that could help Elon Musk realize his vision,” a spokesperson said in a statement, adding that the effort was in its early stages and plans are still being worked out.

Areas of focus could include on-chain solutions “to address some of Twitter’s issues, such as the proliferation of bot accounts in recent years,” the spokesperson said. Musk has repeatedly highlighted the prevalence of bots, or automated accounts, as a concern and even cited them when trying to scrap the deal previously.

Read more: Twitter Gets One-Two Punch as Whistle-Blower Piles On After Musk

--With assistance from Zheping Huang.