Crypto is beating gold as 2020’s best asset so far

A cryptocurrency mania known as decentralized finance has helped to turn digital currencies into this year’s best-performing asset by far.

The Bloomberg Galaxy Crypto Index of digital coins is up about 65 per cent in 2020, exceeding gold’s jump of more than 20 per cent as well as returns from global stocks, bonds and commodities. A key reason for the move higher is a surge in Ethereum, which accounts for more than a third of the crypto gauge’s weight.

Increased adoption of decentralized finance, or DeFi, has driven the climb in Ethereum, which “appears to be maintaining its platform leadership status” in the sector, said Mike McGlone, a strategist at Bloomberg Intelligence.

DeFi ports financial functions onto digital ledgers called blockchains, allowing people to do things like lend or borrow funds and earn interest in a savings-like account without the need for traditional intermediaries such as banks. Its growing popularity is part of a wider trend of increased blockchain usage. Many DeFi applications are run on the Ethereum blockchain.

DeFi collateral levels have reached US$9 billion from less than US$700 million at the start of the year, according to Fasset, which operates a blockchain-based marketplace for infrastructure investment.

Aside from DeFi, proponents of digital currencies such as Bitcoin argue they offer a store of value amid concern that huge stimulus injections to counter the pandemic will stoke inflation and weaken the dollar.

“A purely ethereal instrument performs well when the real economy is on pause,” he said. 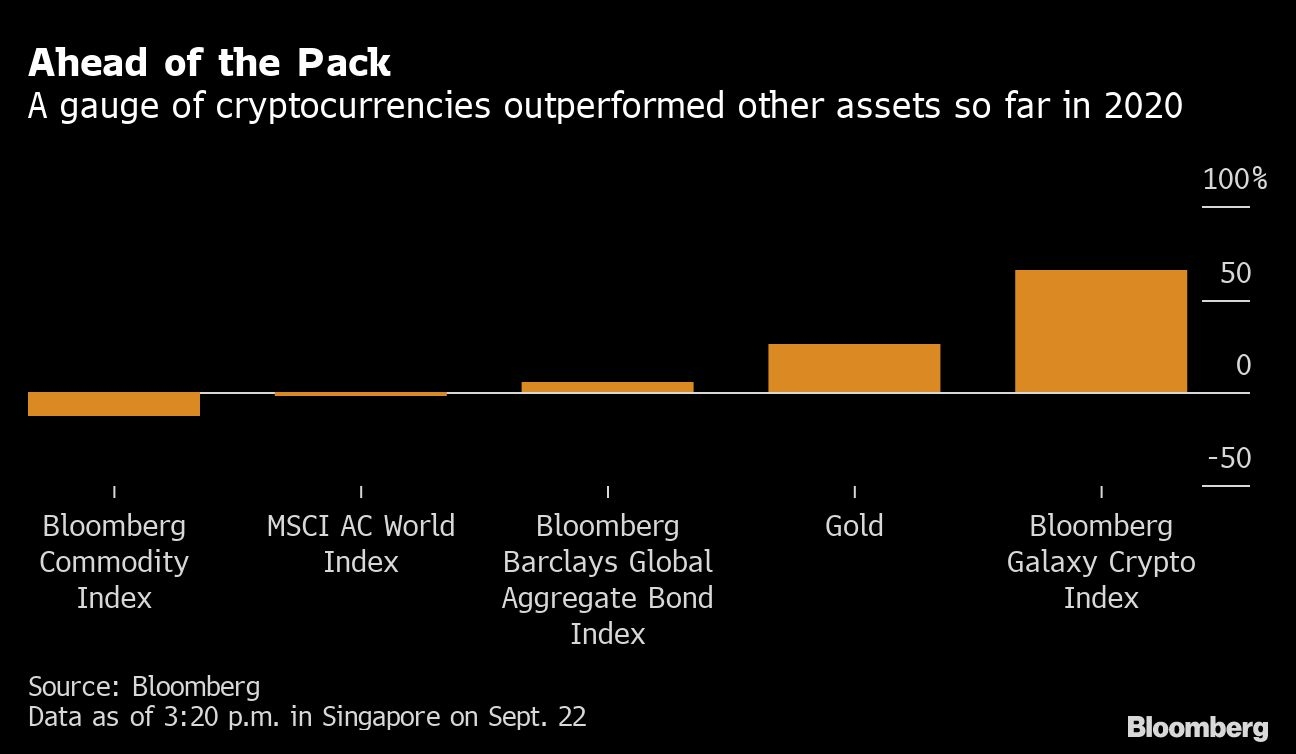 Skeptics are unconvinced, arguing crypto markets have a history of wild swings and are merely riding a tide of liquidity. Cracks are also appearing in the hype around DeFi, suggesting it isn’t as decentralized as touted.

The Bloomberg Galaxy Crypto Index tumbled 6.4 per cent on Monday as the pandemic hurt sentiment across a number of assets, highlighting the risk of sharp moves. The gauge has retreated more than 20 per cent from an August high.

Overall, investor interest in cryptocurrencies is broadening as derivatives markets for Bitcoin and Ethereum expand.

--With assistance from Olga Kharif and Zheping Huang.