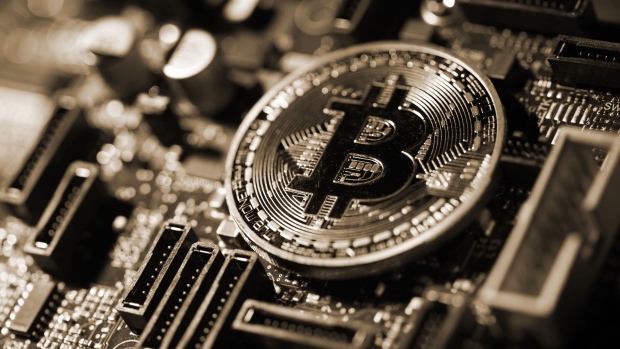 A coin representing Bitcoin cryptocurrency sits on a computer circuit board in this arranged photograph in London, U.K., on Tuesday, Feb. 6, 2018. Cryptocurrencies tracked by Coinmarketcap.com have lost more than $500 billion of market value since early January as governments clamped down, credit-card issuers halted purchases and investors grew increasingly concerned that last year’s meteoric rise in digital assets was unjustified. , Chris Ratcliffe/Bloomberg

Before the COVID-19 crisis, the Tysons Corner, Virginia-based company had about US$500 million mostly invested in short-term U.S. government securities. Saylor began to question that conventional strategy when yields tumbled in the wake of the pandemic. He estimates that so-called asset inflation will surge to more than 20 per cent a year, eroding purchasing power.

“Once the real yield on our treasury got to more than negative 10 per cent, we realized that everything we are doing on P&L is irrelevant,” Saylor said. “We really felt we were on a US$500 million melting ice cube.”

MicroStrategy invested some money in a share buyback and considered real-estate investments, but much of the commercial market has been decimated by COVID, he said. Gold is still being mined, decreasing future returns, unlike the finite amount of Bitcoin to be issued, he said.

So this summer, MicroStrategy became the first public company to invest the lion’s share of its treasury in Bitcoin. In mid-August, the company announced it has purchased US$250 million of the cryptocurrency, and on Sept. 15, Saylor bought an additional US$175 million. He intends to continue buying with cash from operations.

MicroStrategy likely had an easier time shifting to the controversial coin than other public companies face. Saylor, who co-founded the firm in 1989 when he was just 24-years-old, holds around 73 per cent of the voting shares and almost a quarter of its equity. The company went public in 1998.

This isn’t the first time Saylor has garnered headlines. He lost billions in personal wealth after the shares tumbled when the company was accused by the U.S. Securities and Exchange Commission of overstating results. Saylor reached a settlement in 2000 without admitting or denying guilt.

Other private and public companies will likely get into Bitcoin in the next three to six months, he predicted.

“It will probably be private companies first, because they don’t have as much inertia,” Saylor said. “The public companies our size, then mid-sized companies.”

Saylor said when he talked with 10 large shareholders, most of them were “very supportive and complimentary” about the US$1.5 billion market cap company investing in Bitcoin.

Even so, Saylor said he’s not a crypto diehard. If bond yields jump, for instance, he said he won’t hesitate to dump the cryptocurrency, though he has no immediate plans to sell.

“We can liquidate it any day of the week, any hour of the day,”Saylor said. “If I needed to liquidate US$200 million of Bitcoin, I believe I could do it on a Saturday. If I took a haircut, I believe it would be 2 per cent.”

While many crypto faithful have been saying that institutional investors are coming for years, that rush hasn’t yet materialized. Bitcoin is highly volatile, and most company treasurers wouldn’t consider it a viable alternative for what is typically seen as place to park cash for a short period.

Bitcoin hasn’t been the game-changer Saylor was hoping for since the company announced its initial purchase on Aug. 11, though he doesn’t seem too concerned. The largest cryptocurrency has dropped by about 6 per cent to around US$10,500. It is still up about 47 per cent this year.

“Volatility isn’t really a reason to sell,” Saylor said. “Right now this is the only thing we can find with a positive real yield.”