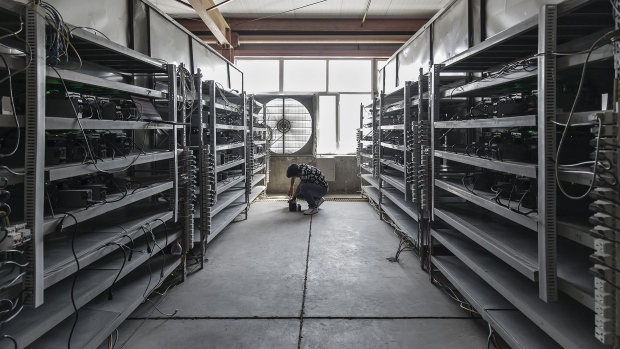 Bitmain mining machines at a Canada Computational Unlimited Inc. computation center in Joliette, Quebec, Canada, on Friday, Sept. 10, 2021. CCU.ai, a Bitcoin mining center powered by hydroelectricity, has been conditionally approved for trading on the TSX Venture Exchange in Toronto under the stock symbol SATO. , Bloomberg

(Bloomberg) -- Chinese Bitcoin mining rig giant Bitmain Technologies Ltd. has been selling machines to miners for about nine years. Now it’s helping to keep them afloat during the cryptocurrency market downturn through its ties with industry financier Antalpha.

Bitmain and its Antpool mining spinoff are working with Singapore-based Antalpha to offer low-interest loans to miners to help them reduce borrowing costs and repay nearly $4 billion in loans backed by equipment which have fallen in value along with the price of Bitcoin since it peaked in November.

Antalpha, which calls Bitmain and Antpool “strategic partners,” will use proprietary data from these two companies to enable it and other crypto lenders to evaluate financing risks, Max Liao, managing director of business development at Antalpha, told Bloomberg. Antpool is the second-largest Bitcoin mining pool in the world.

Bitmain has been one of the largest beneficiaries of the crypto-mining boom in North America after China banned it in May 2021. The mining-machine manufacturer and consultant, which is still based in China while operating subsidiaries overseas, continues to have strong pricing power. It has the lion’s share of the Bitcoin mining hardware market with as much as $5.6 billion in revenue over the last year, according to an estimate by crypto-mining company Luxor Technologies Corp. based on purchase orders and rig prices.

Like other mining pools, Antpool, which has been led by Bitmain’s Chief Executive Officer Micree Zhan after the company spun off from the manufacturer in 2021, collects a fee from miners and in return ensures that each member of the pool gets coins generated from the collective computing power.

Antalpha has also started offering a revolving credit line for miners that can only be used to pay electric bills. The interest rate is as low as 6.6%, almost half of the rate that big miners have on existing loans, according to Vera. The highest rate on Antalpha’s credit line is 8.8%, according to Liao. The line of credit will be secured by the Bitcoin miners produce.

Electricity is one of the largest operational costs for Bitcoin miners since they operate energy-intensive machines to create coins. Energy prices are soaring due to Russia invading Ukraine, which has sent natural gas prices higher. A heat wave in Texas and other US mining hubs is also putting a crimp on miners as they have had to shut machines down to help conserve energy.

With Bitcoin prices falling, energy costs can eat up as much as 40% of a miner’s revenue, according to Vera.

“We are taking their biggest cash outflows, electricity cost, and helping them to reduce that burden,” Liao told Bloomberg. “We all assume that this bear market is going to end sometime, and we just have to make sure everybody makes it through the winter.”

Public mining companies have been in distress. Core Scientific Inc. sold nearly 80% of its Bitcoin holdings in June to cover operational costs and Bitfarms Ltd. sold about half of its Bitcoin holdings to pay down a $100 million loan. Meanwhile, major lenders are losing billions of dollars on deals with bankrupt counterparties like hedge fund Three Arrows Capital.

To alleviate some of the pressure, Antalpha said some of its loans would not require margin calls and it would let miners delay payments to Bitmain for mining machines by allowing miners to use purchased rigs as collateral.

Antalpha is comfortable with the risks, saying it’s willing to be behind the co-lender in terms of debt collection during a default. It expects to have performance projections based on Bitmain data and can monitor miners’ computing power via Antpool.

“It is a good move by Bitmain because even if they are providing financing and there is a chance of default, they are selling their equipment,” said Vera. “It is a way for them to bolster their demand by funneling more capital into their system.”