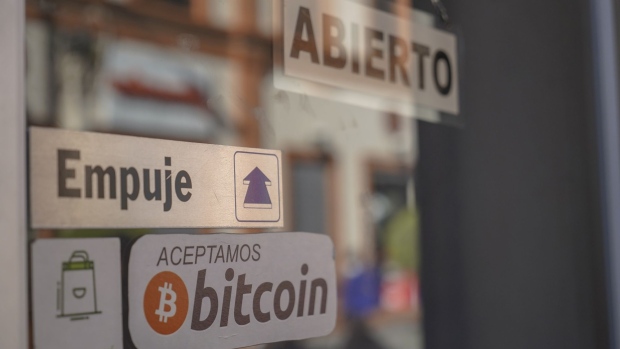 A sign announcing the acceptance of Bitcoin as a payment method displayed at a coffee shop in San Salvador, El Salvador, on Saturday, Jan. 29, 2022. The International Monetary Funds board urged El Salvador to strip Bitcoin of its status as legal currency due to its large risks, highlighting a major obstacle for the nations efforts to get a loan from the institution. Photographer: Camilo Freedman/Bloomberg , Bloomberg

(Bloomberg) -- El Salvador’s President Nayib Bukele won praise from cryptocurrency enthusiasts across the globe last year when he promised to build a tax-free Bitcoin City on the country’s coast, complete with geothermal energy for mining digital coins from a nearby volcano.

To finance it, he told a crowd of onlookers, the government would raise $1 billion via the world’s first sovereign blockchain bond, with a minimum investment of just $100. Four months on, the crypto world is still awaiting their chance at the snack-size bonds that will help build the “Singapore of Latin America.”

“This is 100% targeted to Bitcoiners and Bitcoin enthusiasts, and based on that $100 bite size for tradeability and appetite in the secondary market, they are looking for a meme effect on this bond where the average person can get behind this,” said Mauricio Di Bartolomeo, co-founder of Ledn, a Canada-based cryptocurrency savings and lending company. “This brings the concept of a bond closer to people. It breaks a lot of paradigms and mental models if this thing works.”

Lacking support from multilateral lenders and with its global bonds trading near all-time lows, Bukele’s administration has turned to crypto markets for funding. If all goes according to plan, the so-called volcano bond would raise $500 million for infrastructure in Bitcoin City and another $500 million to buy Bitcoin, with any appreciation in the digital currency ultimately shared with bondholders. A successful bond sale on the blockchain could open doors to the government -- the first to accept Bitcoin as legal tender -- for future issuances using similar instruments in non-traditional financial markets and even encourage other nations to do the same.

The World Bank issued a tranche of debt using blockchain technology in 2019 and the European Investment Bank sold a 100-million euro digital bond on a public blockchain last year.

But the road leading up to El Salvador’s issuance has been full of twists and turns. The presidency has not yet sent a digital securities bill, which would govern the issuance, to lawmakers and the Bukele administration missed the March 15-20 window in which it said it would sell the notes. Finance Minister Alejandro Zelaya said last week that timing was disrupted by market volatility and the Russia-Ukraine conflict. On Tuesday, he said the bond has $1.5 billion in demand and will likely be issued some time this month or in April.

Most recently, state-run utility company LaGeo, which produces geothermal energy, was tapped as the entity to issue the bond instead of the central government. LaGeo held $774 million in total assets at the end of 2021 and netted $36 million in profits for the year, according to the company’s financial statements. LaGeo didn’t respond to a request for comment. Zelaya said the bond will have sovereign guarantees. As of now, though, there is no prospectus.

Under the initial proposal, the bond would be issued as a tokenized security using Blockstream’s Liquid Network, and would pay 6.5% annually over 10 years. It would trade on Bitfinex, a cryptocurrency exchange, which would serve as the bookrunner. Half of the proceeds would be used to buy Bitcoin and enter a five-year lock up. After that period, the government would sell its Bitcoin until it recovers its initial investment, then share half of any additional earnings with investors.

“It is a bit weird that there hasn’t been anything out there either on this regulatory framework they said they were working on or out of Bitfinex with a more detailed breakdown of what’s going on,” said Willem Humes, emerging market analyst for Stifel Financial Corp. “The targeted investors for this bond are not institutional investors. They are either the super-high-net-worth early crypto adopters or big mining collectives.”

Bitfinex said in a response to questions that it had incorporated as a company in El Salvador and is awaiting approval of the digital securities law to apply for a license to operate. The bond won’t be available to U.S. citizens or persons in the U.S., the company said.

El Salvador’s public finances have weakened in recent years, and the recent rise in commodity prices has added to economic risks. Government debt reached 85% of gross domestic product last year and is projected to climb to 96% by 2026, according to the IMF. Last month, the government placed only $210 million of a planned $300 million two-year bond issue in the domestic market, according to Barclays analysts Alejandro Arreaza and Nestor Rodriguez, and “the government is starting to feel the pressure.”

“The first alternative seems to be the Bitcoin bond on which the authorities have been working, but it seems to be a long shot,” and in any event the proceeds are supposed to finance Bitcoin City, they wrote. “Given the complex situation, the government’s last option might be returning to the negotiation table with the IMF, but it could be too late.”

Zelaya, the finance minister, said last March that the government was seeking a $1.3 billion program with the International Monetary Fund, but it has not yet come to fruition. In January, the IMF urged the nation to drop Bitcoin as legal tender.

Investors interested in the Bitcoin bond “are doing this as a vote of support rather than an investment decision,” Ledn’s Di Bartolomeo said.  “A lot of people will be buying this bond because they feel like they are risking $50, because another $50 are in Bitcoin.”