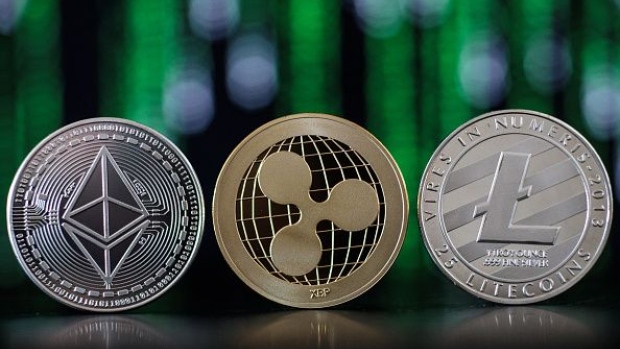 LONDON, ENGLAND - APRIL 25: In this photo illustration of the ethereum, ripple and litecoin cryptocurrency 'altcoins' sit arranged for a photograph on April 25, 2018 in London, England. Cryptocurrency markets began to recover this month following a massive crash during the first quarter of 2018, seeing more than $550 billion wiped from the total market capitalisation. (Photo by Jack Taylor/Getty Images) , Photographer: Jack Taylor/Getty Images Europe

(Bloomberg Opinion) -- The value of all cryptocurrencies in circulation is about $275 billion, which is around the same level as late November 2017. But a lot has happened in between, with values soaring to more than $800 billion at the every end of that year, and then plunging to barely $100 billion in late 2018.

The wild swings are not unlike the early days of the internet era. Internet stocks soared 50 times in value from 1997 to 2000, then lost 95% of their value in a crash that bottomed around September 2002. Prices were recovering by the end of that year, but many investors were still licking their wounds and were reluctant to buy. Of those who did, some looked for bigger companies such as Amazon.com that had weathered the crash, while others looked forward to initial public offerings from firms like Google.

There’s one important difference for crypto. Failed companies liquidate, sell themselves or get delisted. There’s no similar process in crypto. So the Pets.com of crypto are still around. There may be no one maintaining or improving the code, there may be no users, but as long as some optimists somewhere are trading the coin, it will show up on crypto exchanges. I can’t tell you which, if any, will thrive or go bust, but there are areas with much promise. (Full disclosure: I own Bitcoin and other cryptocurrencies.)

The first thing to do is jettison the deadwood and replace it with coins with more potential. Crypto experts will find bargains among the coins that have not kept up with Bitcoin, but most crypto ideas require continuous momentum in order to attract developer talent, investor capital and user enthusiasm for the necessary network effects to catch on.

The primary place to look for deadwood would be the 211 coins representing 21% of the total crypto market capitalization at the end of November 2017 that failed to maintain their values in terms of Bitcoin at the market low in December 2018. The biggest names in this group are Ethereum, Litecoin, TRON, Cardano and Dash. These are strong technically, but could not command investor loyalty at the bottom of the market. Although overall crypto prices have returned to November 2017 levels, this group is collectively down 25%. These coins could be the first projects abandoned by investors at the next downturn. I don’t claim these are bad investments, but they were all on Santa’s naughty list for Christmas 2018, and you should know why before you hold them.

Another problematic group is the coins that have not maintained their Bitcoin capitalization in the 2019 rally. That’s 534 coins representing 13% of the crypto market in November 2017. The biggest ones are Ripple, Stellar, Monero, IOTA and NEO. Ripple and Stellar are blockchains for settling financial transactions, Monero is a transaction currency with strong privacy protections, IOTA is a currency for the Internet of things and NEO is a digital asset smart contract platform. These coins have lost out in the regulatory evolution since 2017. Monero seems unlikely to be tolerated to the extent necessary to make it a good investment. The other four face competition from blockchains developed by traditional companies working with regulators. There are probably bargains in this group, but they’re cheap for specific reasons.

The final place to look for deadwood is in currencies introduced in the December 2017 frenzy. This group of 111 was valued at more than $25 billion at the peak, but are less than $1 billion today. None are individually big enough to mention.

That leaves five currencies, representing 53% of market capitalization in November 2017, that took full advantage of the rally in December 2017, maintained good value even at the lows of December 2018, and have rebounded sharply. That doesn’t mean they’re good investments today, but they have demonstrated strong price action in good times and bad. The five are Bitcoin, EOS, Binance Coin, Basic Attention Coin and Freicoin. The last two are too small to discuss, although both are interesting ideas. Bitcoin is familiar. EOS is a distributed computer and Binance is a coin associated with a crypto exchange.

Finally, the most exciting place to look for new investment is coins introduced to the public after the peak. Bitcoin SV, Tezos, Ontology, MakerDAO and Crypto.com Chain are the five biggest, but there are 1,072 by my count. So picking winners can feel like playing the lottery, but if you want exposure to crypto you should have some newer entrants given how fast the market changes.

Bitcoin SV (for “Satoshi’s Vision”) is a controversial coin promoted by a guy who claims to be Satoshi Nakamoto, the inventor of bitcoin. Tezos is similar to Ethereum. Ontology connects blockchains. MakerDAO is a combination of two coins that provides a decentralized stablecoin for transactions. Crypto.com Chain integrates digital transactions with Visa and other traditional payment systems.

All crypto investments are high risk. Market volatility is high, investor protections are low and the entire sector could go to zero tomorrow. But there are plausible scenarios in which crypto grows to become a significant part of the economy, and I personally try to keep 2% of my portfolio in a diversified crypto exposure. That doesn’t require becoming a crypto expert, but it does mean constantly pruning the portfolio for no-longer-promising holdings and making sure I have exposure to up-and-coming ones.

To contact the author of this story: Aaron Brown at aaron.brown@privateeram.com

Aaron Brown is a former Managing Director and Head of Financial Market Research at AQR Capital Management. He is the author of "The Poker Face of Wall Street." He may have a stake in the areas he writes about.