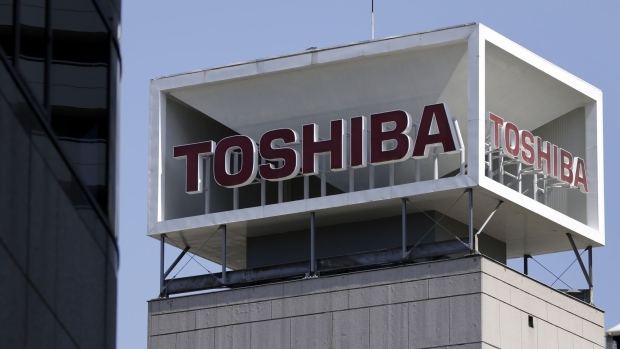 A pedestrian walks up a flight of stairs near signage for Toshiba Corp. displayed at the company's headquarters in Tokyo, Japan, on Wednesday, April 7, 2021. Toshiba surged its daily limit of 18% after confirming it received an initial buyout offer from CVC Capital Partners, setting the stage for potentially the largest private equity-led acquisition in years. Photographer: Kiyoshi Ota/Bloomberg , Bloomberg

(Bloomberg) -- CVC Capital Partners has offered about 5,000 yen per share in its buyout offer for Toshiba Corp., according to an executive at the Japanese conglomerate.

Toshiba’s board plans to form a special committee to consider the proposal, said the executive, who asked not to be identified discussing confidential information. A bid at that level would value Toshiba at about 2.28 trillion yen ($20.7 billion), according to data compiled by Bloomberg.

An offer of 5,000 yen would represent a 31% premium to Toshiba’s closing price on Tuesday, before news of the bid emerged. CVC’s proposal doesn’t currently include any other funds, the executive said.

Toshiba hasn’t yet discussed CVC’s offer with Effissimo Capital Management, the Singapore-based fund that ranks as its biggest shareholder, the executive said.

The Japanese company confirmed earlier Wednesday that it had received a preliminary offer from CVC, without revealing the level of the bid. Toshiba said it will carefully assess the proposal and make further disclosures when necessary.