The technical glitches plaguing CD Projekt SA’s Cyberpunk 2077 game have cut more than US$1 billion off the wealth of the company’s founders. Perhaps more seriously, the quality-first image of the studio has been shaken, and may not be easy to win back.

CD Projekt shares plunged by a third over the past six days as the number of bugs plaguing the highly anticipated futuristic game prompted an apology from the firm and an offer for refunds of gamers on previous-generation consoles. Short sellers have also started targeting the stock, with short interest up from less than 1 per cent of free float in September to 8.3 per cent on Monday, according to Markit data. 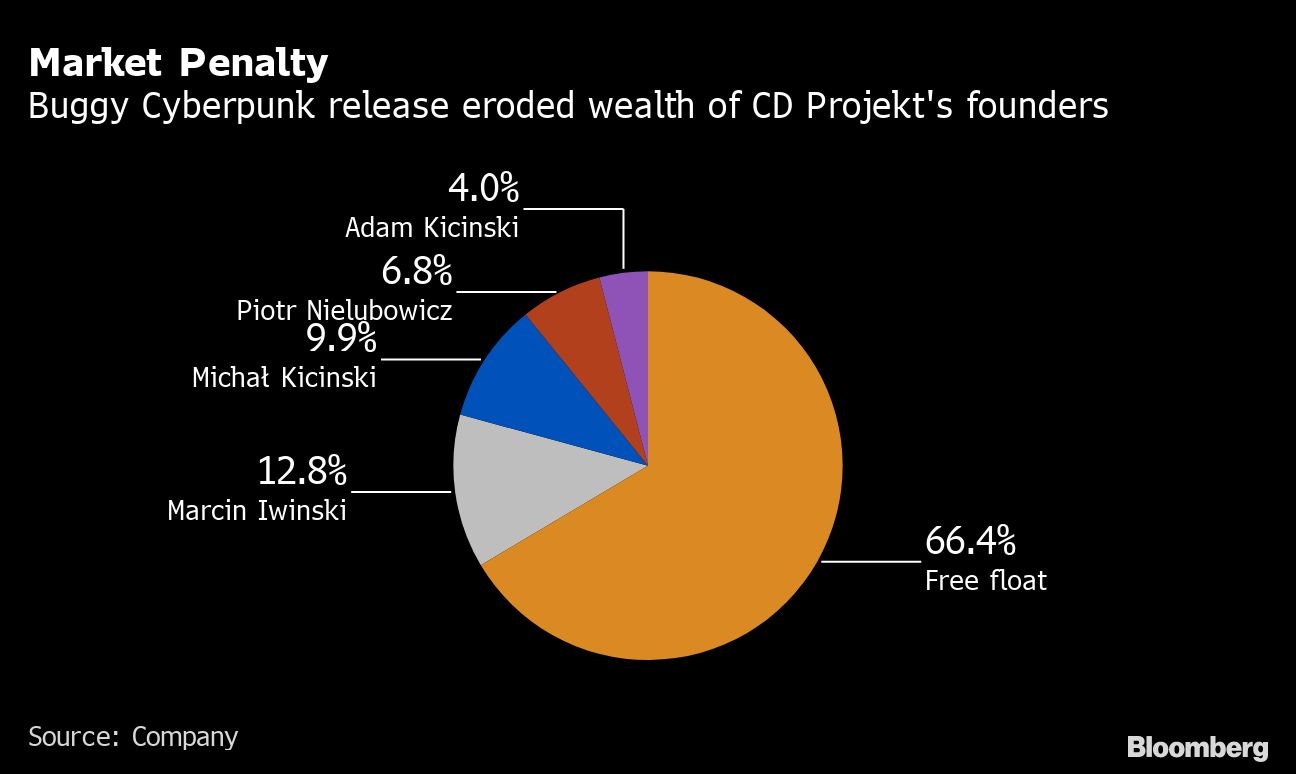 The story of college dropouts who built one of Europe’s biggest gaming studios has inspired other Poles to try and emulate them, flooding the Warsaw Stock Exchange with similar offerings. The founders’ joint 34 per cent stake was valued at about US$3 billion on Tuesday’s market value.

The three executives, Marcin Iwinski, Adam Kicinski and Piotr Nielubowicz, along with a fourth major owner, Michal Kicinski, have joined the ranks of the wealthiest Poles thanks to the stellar rally in CD Projekt shares. However, they now face a fight to salvage the studio’s reputation and prove that Cyberpunk will also be playable for owners of older-generation consoles, which are much more common than the just-released new ones.

“There is now huge scar on the reputation of both the studio and its management,” Tomasz Rodak, an analyst at BOS Bank SA said in an email. “In only a couple of days, CD Projekt fell from the most adored studio to the most hated one. Restoring trust is not impossible, but would need much time and effort.”

Analysts vary on their assessment of long-lasting consequences for the studio, which is relying heavily on the new title. They agree that the pace of fixing bugs will be crucial for revenue, even as opinions about the PC version look much better. The average forecast for 12-month sales fell to 25.6 million copies from almost 30 million copies expected before the Dec. 10 release, based on nine refreshed estimates collected by Bloomberg News. The stock stopped its free-fall on Tuesday, rising 2.5 per cent at 2:02 p.m. in Warsaw.

“If your only option right now is playing Cyberpunk 2077 on either of the base console platforms, I highly suggest you don’t play at all until its many terrible performance issues are fixed,” the popular games website IGN said, recommending that players apply for a refund. The site separated its mostly positive PC review from the negative console-version assessment, saying it’s “a different game entirely.”

Brokers including Morgan Stanley and Barclays Plc are now predicting that a multiplayer component of Cyberpunk, crucial for long-term sales, may take longer to prepare. The studio plans to release a strategy update in the first quarter of 2021.