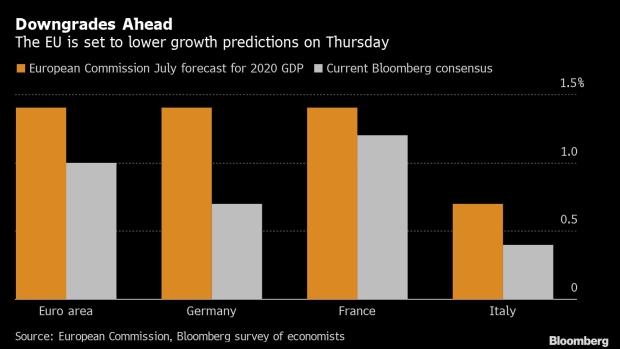 (Bloomberg) -- One of the last central banks in Europe still thinking about lifting interest rates looks likely to take a rain check after all.

Czech policy makers have set the stage for another discussion on whether or not to raise borrowing costs, but the vote on Thursday will probably leave the benchmark at 2% because of economic headwinds coming from the country’s main trading partners.

Barring a major surprise, the decision will mirror the wait-and see approach prevailing among east European rate setters even after the U.S. Federal Reserve and the European Central Bank have eased. Serbia is also expected to most likely stay put on Thursday, a day after Poland and Romania kept borrowing costs unchanged.

While strong consumer spending has kept Czech inflation above the 2% target, the debate centers on the magnitude of the economic slowdown abroad. The board of officials will also review new staff forecasts, after twice choosing to disregard the rate hike implied in earlier projections.

Since their last deliberations six weeks ago, when the majority outvoted two hike-seeking dissenters, several rate setters signaled that domestic and foreign data have failed to bolster reasons for an increase. The worsening export-market outlook is still the main argument against another rate hike for now.

“The potential threats of Brexit and trade wars may appear to be suppressed for the moment, but they’re still lingering,” said Petr Dufek, an analyst at KBC Group NV’s Czech unit. “And there is also the persistent weakness in the German economy, the destination for most of the domestic manufacturing industry’s production.”

The European Commission will release its quarterly economic forecast on Thursday, and 2020 growth projections are likely to be downgraded. Consensus estimates compiled by Bloomberg show that the euro-area economy will expand just 1% next year, compared with the commission’s 1.4% estimate in July.

The exchange rate also plays an important role in Czech policy discussions. After defying predictions for appreciation for the past two years, the koruna was among the three central European currencies that were the biggest gainers among emerging market peers in October, effectively tightening monetary conditions.

Serbia, the fourth central bank in the region deciding on rates this week, is facing a different economic picture after two surprise rate reductions this year brought the benchmark to a record-low 2.5%.

While slowing inflation, below-target growth and a stronger currency could provide arguments for another cut, the bank was seen more likely to opt for caution because of risks of a sudden capital outflow from emerging markets, UniCredit SpA economist Mauro Giorgio Marrano said.

--With assistance from Gordana Filipovic.

To contact the reporter on this story: Peter Laca in Prague at placa@bloomberg.net

To contact the editors responsible for this story: Balazs Penz at bpenz@bloomberg.net, Michael Winfrey, Andras Gergely