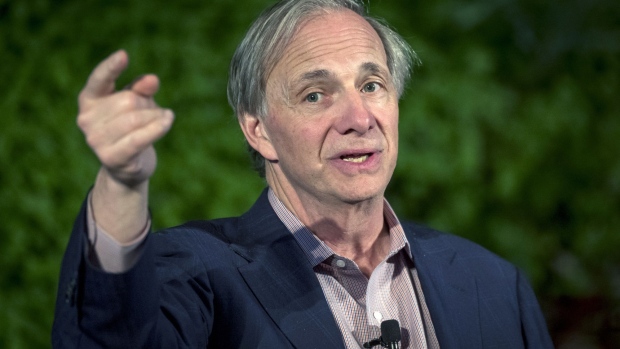 Ray Dalio’s firm, which oversees $140 billion of assets, plans to open two sustainable funds in 2021. Bridgewater started advising clients this year on how to manage assets to meet both societal and financial goals. The effort is being overseen by senior investment executive Carsten Stendevad, Chief Operating Officer Brian Kreiter and Karen Karniol-Tambour, director of investment research, with help from Dan Hochman, head of sustainability research.

“There are big shifts afoot in the industry where we’re seeing an expansion of investment objectives from risk and return to including impact,” Stendevad said in a telephone interview. “Sustainable investing is the top strategic agenda in the industry.”

Investments designed to be both socially and financially rewarding are surging in popularity as investors seek to address issues such as income inequality and global warming. Sustainable investing in the U.S. totaled $17.1 trillion at the start of this year, up 42% from the end of 2017, according to the US SIF Foundation.

Bridgewater’s new strategy will pick securities that are the most aligned with the United Nations’ Sustainable Development Goals, which seek to end poverty, fight inequalities and tackle climate change. The UN estimates that its 17 goals will need annual commitments of $5 trillion to $7 trillion globally over the next decade.

One of Bridgewater’s sustainable funds will be a UCITS fund, which is a mutual fund with hedge fund-like characteristics and is regulated by the European Union. It will be launched in the first quarter and managed by Societe Generale SA’s Lyxor Asset Management, according to people with knowledge of the matter. The Paris-based firm has $15 billion in environmental, social and governance investments.

Both of Bridgewater’s new funds will be modeled on its All Weather fund, a strategy that accounts for about half of the firm’s assets. The passive pool seeks to make money in most economic environments. That fund returned 5.7% this year through November, a person familiar with the situation said. It has climbed at an annualized rate of 7.7% since its 1996 inception.

In March, Westport, Connecticut-based Bridgewater signed up to the Principles for Responsible Investment, a UN-based framework that helps money managers incorporate ESG in their investments. About 3,500 firms managing a combined $100 trillion are signatories.

Karniol-Tambour said in a September report that social conditions in the U.S. such as inequality will increasingly affect markets. Dalio has in the past talked about class and power struggles. Earlier this month, he raised the question of whether the U.S. is at a tipping point that could move it from what he says is “manageable” tension to a full-blown revolution.