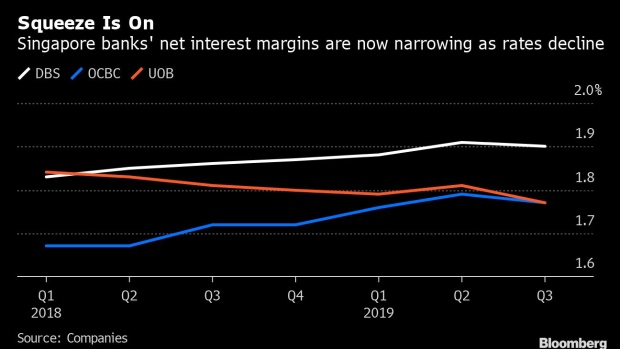 Chief Executive Officer Piyush Gupta said he expects loan growth to be similar next year, even as Singapore lenders contend with an economic slowdown that is putting a strain on credit demand and loan quality. The nation’s biggest banks are still benefiting from their wealth businesses, which they have been expanding in recent years as the number of rich Asians increases.

“Our transformed franchise, nimble execution and balance sheet strength will put us in good stead to deliver healthy shareholder returns despite the prevailing macroeconomic and geopolitical headwinds,” Gupta said in the statement.

While total provisions including for soured loans rose 8%, the increase was much smaller than those of DBS’s local rivals Oversea-Chinese Banking Corp. and United Overseas Bank Ltd.

DBS also beat its competitors on net interest margin. The measure of loan profitability dropped just one basis point to 1.9% from the preceding quarter. The margin will slide about seven basis points next year given the outlook for lower interest rates, Gupta said.

OCBC earlier this week reported a 6% drop in net income due to surging provisions, including a one-time charge for its Indonesian unit. UOB fared better as profit rose 8% from higher lending and wealth.

(Updates with details of results throughout)

To contact the reporter on this story: Chanyaporn Chanjaroen in Singapore at cchanjaroen@bloomberg.net

To contact the editors responsible for this story: Marcus Wright at mwright115@bloomberg.net, Russell Ward, Peter Vercoe