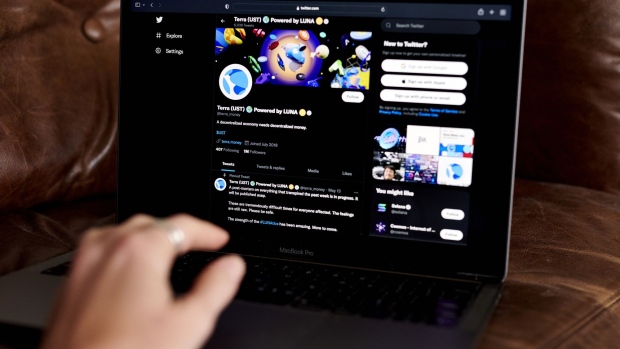 The Terra Twitter page on a laptop computer arranged in the Brooklyn borough of New York, US, on Monday, May 16, 2022. The collapse of the Terra ecosystem, and the tokens Luna and UST, will go down as one of the most painful and devastating chapters in crypto history. Photographer: Gabby Jones/Bloomberg , Bloomberg

(Bloomberg) -- Hardcore believers in the future of decentralized finance aren’t giving up on algorithmic stablecoins after the spectacular collapse of TerraUSD (UST), saying they remain key for moving to a world without intermediaries such as banks and brokerages.

“An algo stable will exist in the next five-to-seven years,” said Hassan Bassiri, a portfolio manager at Arca, which was an investor in Terra. “And it has to exist or else what are we even doing in this space?”

DeFi had been one of the fastest growing sectors in crypto the past few years, with a slew of borrowing and lending applications offering double- and triple-digit returns. Like most crypto projects, they are dependent on attracting enough transactional volume to keep the blockchain networks going. The model appeared to work until central banks began removing Covid-era stimulus, triggering a retreat in risk appetite and raising questions about whether the incentive-based systems are sustainable.

Terra collapsed in early May after the software intended to keep UST stable -- allowing it avoid the normal volatility in crypto prices so that it could be a more reliable tool for transactions-- couldn’t overcome a plunge in demand for its related Luna token. While it was the largest algo stablecoin by far at around $18 billion in market value, it was only one of about a dozen that have failed or were unable to maintain promised 1-to-1 pegs to assets such as the dollar.

Among the handful of algo stablecoins that survive is the USDD token launched by controversial crypto entrepreneur Justin Sun on his Tron network just before the collapse of UST.

Sun defended the project in an interview with Bloomberg News, saying he saw the need for a stablecoin free from regulators as someone who experienced the fall of the crypto market in China after the country announced a ban on the sector.

“If tomorrow regulators decide to ban stablecoins, like when China announced a ban in crypto, it would pose great risks to the whole crypto system,” Sun said. “We must have a stablecoin that’s not controlled by a third party outside crypto,” referring to popular stablecoins such as USDC that are backed by traditional assets like cash and short-term securities.

USDD went live on the Tron blockchain in early May, according to Sun. It can be used on the Ethereum and Binance Smart Chain blockchains through so-called bridging software. The stablecoin uses an arbitrage mechanism similar to what Terra used to maintain its peg. For example, when 1 USDD drops below $1, traders can make an instant profit by sending 1 USDD to the Tron blockchain in exchange for $1 worth of Tron, the native token of the network, with the arbitrage incentive designed to bring USDD’s price back to $1.

Terra showed that an integration of such algorithmic programming to keep a token stable is easier said than done, largely because the stablecoin is dependent on investors believing that its sister cryptocurrency will continue to appreciate.

“If you really want to make these things, you kind of have to have this really sharp technical ability but also this crazy wondrous gaze in your eyes,” said Tarun Chitra, founder and chief executive officer at Gauntlet, a financial modeling platform for crypto. “Because you have to somehow believe you’re going to get over all the failures that have happened historically.”

Sun agreed that Terra’s failure shows the flaw of algorithmic stablecoins, but said it also gives an opportunity for new projects to adjust. USDD aims to raise $10 billion through the Tron DAO Reserve -- which it called an “alliance” of market participants including Alameda Research and Amber Group -- to defend USDD’s peg. That’s a similar setup to Terra’s main developer Do Kwon’s Singapore-based non-profit Luna Foundation Guard.

“Our definition of an algorithmic stablecoin is not that it’s free from any people,” Sun said. “We want something without any connections to banks or any stablecoins associated with assets managed by banks.”

Regulators around the world already have been concerned about stablecoins as a source of risk in the financial system. US Treasury Secretary Janet Yellen said recently that Terra’s meltdown underscores the urgent need for guardrails and said it would be “highly appropriate” for lawmakers to enact legislation as soon as this year.

USDD is also offering promotional high returns, even topping the 20% yields offered on Terra with a promised return of at least 30%. Exchanges like Huobi have already launched USDD-related high-yield products. Sun said the outsize yields would be reviewed by Tron DAO Reserve on a monthly basis and would “actively adjust” the number based on market conditions. Still, not everyone is convinced USDD and even the entire sector will avoid the same fate as UST.

I “think the sector is done,” said Ryan Watkins, co-founder of crypto hedge fund Pangea Fund Management. “I was holding out hope that Terra could pivot in time.”