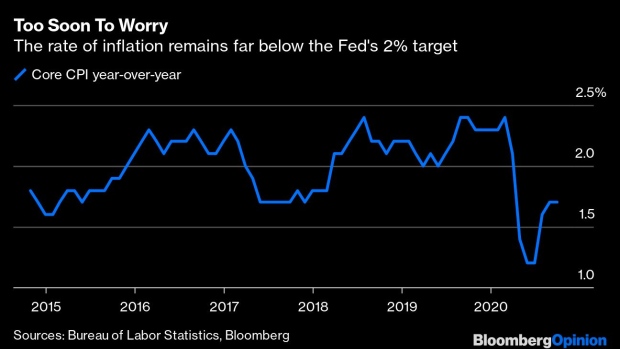 (Bloomberg Opinion) -- After nosediving from March through May as the pandemic-sired lockdowns devastated U.S. household spending, consumer prices rebounded in the following four months. Some fear this is the start of a resurgence of inflation. The Federal Reserve Bank of New York’s survey of consumer inflation expectations shows a jump from 2.4% to 3% for both one and three years ahead.

If you think serious inflation is coming, you don’t believe in the fundamental power of excess global supply to depress prices. With globalization, Western technology is combined with cheap Asian labor to produce a vast array of goods and, increasingly, services. But Asian consumers purchase only a fraction of what they produce. China’s consumer spending is just 39% of gross domestic product, compared with 68% in the U.S., resulting in a saving glut that is highly deflationary.

This glut is unlikely to atrophy even if the U.S.-China trade war intensifies. Western and even Asian companies such as Samsung, Hasbro, Apple and Nintendo are shifting production from China to Vietnam, Pakistan and other Asian countries that have even-lower costs and are out of the trade war’s line of fire. It’s no surprise that the Federal Reserve, with all its power, has not been able to push the inflation rate to its 2% target and is admitting so by saying it will allow inflation to overshoot its target for a period of time before tightening monetary policy. To be sure, the Fed isn’t alone among central banks in failing to spark inflation to an acceptable level.

On a micro level, the pandemic has shown the power of supply and demand to determine prices. With many still house-bound, the cost of food at home in September was up 4.1% from a year earlier, but atnearly deserted schools and workplaces, food costs fell 3.4%, according to the Bureau of Labor Statistics.

Supply and demand forces are also revealed in slumping energy prices. With people staying at home and not driving, commuting or flying, demand for crude oil has slumped. West Texas Intermediate prices have fallen from $58 per barrel at the beginning of the year to a recent $41 even though U.S. frackers and conventional oil producers have cut output from 12 million barrels per day to 11 million. And that’s after the earlier drop from $67 per barrel in early October 2018.

The Consumer Price Index overstates inflation in a number of ways, including its accounting for housing. The statistics assume that homeowners rent their abodes from themselves, paying market rental rates. This owner’s equivalent rent component is large, 24% of the CPI, and has risen rapidly in recent years as rental costs jumped along with robust demand. Owner’s equivalent rent was up 2.5% in September from a year earlier, but if you stripped that out, CPI edged up just 0.8% instead of the reported 1.4%.  I doubt that many homeowners consider rent paid to themselves as part of their cost of living.

President Donald Trump’s executive order to reduce prescription drug costs for Medicare recipients to what pharmaceutical companies charge in other countries is highly deflationary. In the past, Americans have essentially paid the cost of developing new drugs when foreign governments buy them closer to marginal costs. Specialty branded drug costs in the U.S. are up 62% since January 2014, compared with the 10% rise in overall CPI. At the same time, generic drug costs for Americans have dropped 37%. With the chronic rise in branded pharmaceutical prices, total drugs, 1.5% of the CPI, are up 14% since January 2014.

Price spikes due to the emerging coronavirus crisis in the spring are being retraced as production and supply chains adjust. Slaughterhouse closings due to infected plant workers failed to stop animals from growing and adding weight. So now chicken wings and prime rib are abundant and cheaper than before the pandemic commenced.

Trump’s contraction of Covid-19 has brought home the persistence of the pandemic and the deflation-spawning weak economic growth that lies ahead. So does the deteriorating household income and employment picture. Personal income dropped 2.7% in August as the extra unemployment insurance benefits expired, and despite the looming election, Washington is yet to pump more money into households.

Although the unemployment rate fell to 7.9% in September from 8.4% in August, that’s mainly due to  temporary layoffs that became permanent as employers abandoned hopes for a quick recovery. Walt Disney Co. is axing 28,000 theme park workers who previously were on temporary furlough, and American Airlines and United Airlines are terminating 32,000. In April, 88% of those who lost jobs reported their layoffs were temporary, but only 51% thought so in September, according to the Labor Department. Those reporting permanent job losses jumped from 2 million in April to 3.8 million in September.

As the pandemic-sired recession persists into 2021, even-lower inflation if not deflation looms. That would be accompanied by even-lower yields on U.S. Treasury securities. Commodity prices, not just crude oil, would fall. Online retailers would continue to benefit from stay-at-home consumers but the pressure on shopping malls would intensify. Many more heavily-leveraged retailers and others with huge debt service would fold.

A. Gary Shilling is president of A. Gary Shilling & Co., a New Jersey consultancy, a Registered Investment Advisor and author of “The Age of Deleveraging: Investment Strategies for a Decade of Slow Growth and Deflation.” Some portfolios he manages invest in currencies and commodities.