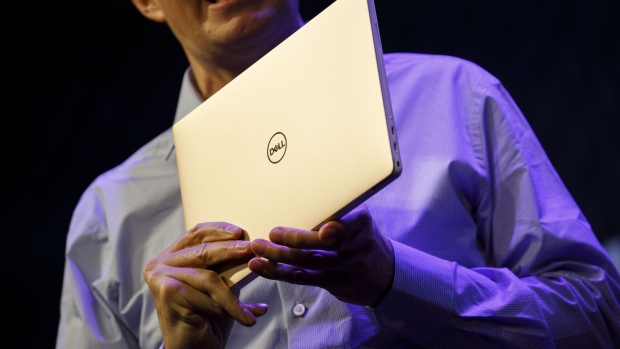 Adjusted sales will be US$91.8 billion to US$92.5 billion for fiscal year 2020, Dell Chief Financial Officer Tom Sweet said Tuesday during a conference call with analysts. The company said in August that revenue would be US$93 billion to US$94.5 billion in the fiscal year ending in January.

Intel said last week it’s facing challenges delivering components to customers because of tight supply and limited chip inventories. Sweet said the development will affect Dell’s ability in the current period to produce some commercial computers for corporate clients, which is a key market. Business purchases of Dell’s PC often spur the sales of additional products and services, generating a higher profit margin.

The company also continues to contend with falling demand for servers amid geopolitical and trade tensions. Weaker sales in China and among large corporate clients led a 16% decline in third-quarter revenue from servers and networking gear.

“Obviously we’re not extraordinarily happy with them right now,” Sweet said about Intel in an interview. “I don’t have a pathway to mitigate the supply constraints that they’ve given me for Q4.”

Shares fell more than three per cent in extended trading, after closing at US$53.19 in New York. The stock has gained 8.8 per cent this year.

This is the second time Dell has cut its annual sales forecast in the past three months. Sweet said he had always expected to narrow the range, as he did in August, because the initial revenue guidance was broad.

Dell reported profit, excluding some items, of US$1.75 a share in the quarter ended Nov. 1. Analysts, on average, projected US$1.59, according to data compiled by Bloomberg. During the conference call, Dell raised the low end of its 2020 earnings forecast to US$7.25 to $7.40 a share, from US$6.95 to US$7.40. Lower component prices have aided the profit margins of Dell and rival HP Inc., which also reported earnings Tuesday.

Revenue in the personal computer division increased 4.6 per cent to US$11.4 billion in the quarter. Commercial sales rose 9.4 per cent due to corporate clients upgrading their computers to adopt Microsoft Corp.’s Windows 10 operating system. Revenue from consumers, on the other hand, fell 6.4 per cent in the period.

Sales from Dell’s data-center unit declined 6.1 per cent to US$8.39 billion, the Round Rock, Texas-based company said in a statement. Storage hardware sales increased 6.9 per cent, but servers and networking gear pulled down the unit.

Dell’s revenue growth is helped by its majority interest in software maker VMware Inc. VMware reported sales Tuesday that exceeded analysts’ estimates, rising 12 per cent to US$2.46 billion. Profit, excluding some items, was US$1.49 a share, topping analysts’ average estimate of $1.42. VMware makes software that allows customers to combine multiple tasks on a single server, and is trying to shift to selling more programs that help companies run applications in the cloud and in their own data centers.