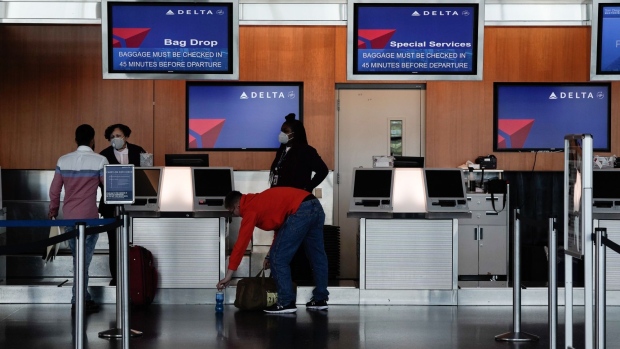 Delta Air Lines Inc. says the resurgence of new coronavirus cases and related travel restrictions have stalled a fledgling recovery in U.S. travel demand and prompted the carrier to slash the number of flights it had hoped to return to its schedule next month.

The airline will add back no more than 500 flights in August instead of the 1,000 it had planned. It doesn’t see adding much more through the end of this year.

“Demand growth has largely stalled,” Chief Executive Officer Ed Bastian said in an interview. “The pace of improvement from this point is going to depend on consumers’ confidence in flying.”

He made his comments as Delta on Tuesday reported a record quarterly adjusted loss of US$2.8 billion after a coronavirus-driven collapse in demand slashed revenue by 91 per cent in the three months through June.

Delta leads off major carriers reporting earnings for the first full quarter affected by the pandemic. Analysts will comb through its results for signs of how well the industry is coping with the crisis.

While airlines last month indicated they were climbing back from the depths of the pandemic, the latest surge for the virus has raised fears the nascent recovery will be quashed.

Delta doesn’t expect further reductions to its daily cash burn in July, ending a string of monthly improvements that brought the rate down to US$27 million a day last month from US$100 million in March.

“We’re roughly stalled,” Bastian said. “We are not going backwards.”

The airline cut operating expenses 53 per cent by parking some aircraft, retiring others and reducing labor expenses, thanks in part to 45,000 workers taking voluntary unpaid leaves, the Atlanta-based airline said in a statement.

Delta fell less than 1 per cent to US$26.69 before the start of regular trading in New York. The stock had tumbled 54 per cent this year through Monday, in line with other big U.S. carriers, but much worse than the 2.3 per cent drop registered by the S&P 500.

The magnitude of the quarterly loss “illustrates the truly staggering impact of the Covid-19 pandemic on our business,” Bastian said in the statement. “Given the combined effects of the pandemic and associated financial impact on the global economy, we continue to believe that it will be more than two years before we see a sustainable recovery.”

Despite the setback, Delta still expects to reduce cash burn to zero by year-end and to return to “profitability, marginally,” by spring, he said. “Not a lot, but that’s the hope.”

At least 15,000 workers had signed up for early retirement or voluntary separation packages ahead of the midnight Monday deadline, he said. The figure doesn’t include pilots, who have another week to decide. The results could help reduce or eliminate the need for furloughs later this year.

Delta ended the quarter with US$15.7 billion in liquidity through a combination of government and other financing. The airline is debating whether to take an additional US$4.7 billion federal loan.

The carrier reported a loss of US$4.43 a share, while analysts expected US$4.22, based on the average of estimates compiled by Bloomberg. Operating revenue tumbled to US$1.18 billion, while analysts projected US$1.43 billion.