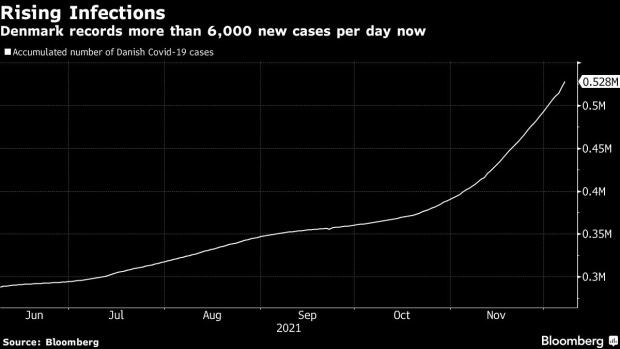 Terrace tables stand covered outside closed restaurants in the popular tourist location of Nyhavn Harbour in Copenhagen, Denmark, on Wednesday, April 15, 2020. Danish Prime Minister Mette Frederiksen says her government's efforts to fight Covid-19 have been so successful that the country may now be facing a broader rollback of its lockdown than originally planned. Photographer: Carsten Snejbjerg/Bloomberg , Bloomberg

(Bloomberg) -- Denmark introduced a light version of the lockdown it had last winter, limiting opening hours for bars and restaurants and closing schools early for the Christmas break, as the omicron variant is spreading across the Nordic country.

“The Danish economy is very strong” but “we need to do what we can to avoid comprehensive lockdowns,” Prime Minister Mette Frederiksen said late Wednesday at a Copenhagen press briefing. The government will introduce compensation plans for the companies affected by the new curbs, Business Minister Simon Kollerup said at the same event.

Denmark on Wednesday recorded more than 6,600 new infections, a record high and 10 times more the daily rate of two months ago. The Nordic country, with a population of 5.8 million, has fully vaccinated 4.5 million, of which 1 million have received a booster shot.

Denmark, one of the countries to test and sequence the most, has registered 577 omicron cases with six of those currently hospitalized. This week it gave up on an initial strategy to spend extra resources on tracking infections of the variant, which is now spreading through several contamination chains.

These were the curbs introduced by the Danish government on Wednesday: