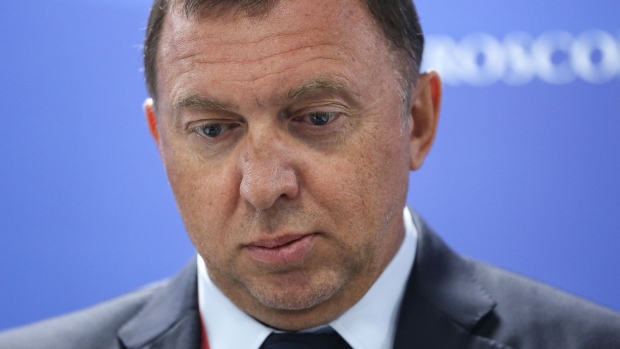 (Bloomberg) -- U.S. prosecutors are seeking records from a company associated with Russian billionaire Oleg Deripaska as part of a previously unreported investigation, according to documents filed in a London court.

The investigators are seeking evidence of “money laundering, tax offenses and fraud offenses” from 18 individuals and companies including Terra Services Ltd., a real estate firm that until last year was controlled by Deripaska, according to documents filed this week.

The U.S. probe grew out of Special Counsel Robert Mueller’s investigation of Russian election interference, according to the filings. It is “live and ongoing,” according to a document filed Thursday by the U.K. government.

The investigation came to light because Terra is challenging a search warrant that led to the December 2018 seizure of at least 25,000 electronic documents from a British storage unit it owned. Terra asked a London judge to prevent the documents from being handed over to the Americans.

Terra said in a filing that it believed the search request was made “in connection with the special counsel investigation being conducted in the U.S.”

The presiding U.K. judge who granted the search warrant in December 2018 said that any seized materials could be helpful “in an ongoing U.S. investigation into a number of criminal offenses committed by two U.S. subjects, Paul Manafort and Rick Gates,” according to court documents. But by that time Manafort had been convicted and was awaiting sentencing. Gates had already pleaded guilty and was cooperating with prosecutors.

Mueller’s team ended its work earlier this year, referring several matters to other U.S. prosecutors. Many of those haven’t been made public. Parts of Mueller’s report dealing with Manafort and Gates are redacted to avoid interfering with unspecified ongoing investigations.

According to Mueller’s report, Manafort had a business dispute with Deripaska that he was looking to resolve, and the one-time Donald Trump campaign chairman offered Deripaska briefings and internal polling data. Manafort was convicted of multiple crimes and is serving a sentence of more than seven years; Deripaska wasn’t accused of wrongdoing.

The U.S. request named 18 entities including Terra Services and two U.K.-based lawyers. The documents available in the London case don’t include the U.S. request for a search, or the corresponding U.K. search warrant, but quote from parts of the warrant.

The U.K. National Crime Agency, which carried on the search, and the U.S. Department of Justice declined to comment.

Judges have so far denied requests by Terra and others to see the U.S. letter.

“There is a degree of confusion as to what exactly is being investigated,” Terra’s lawyer, Monica Carss-Frisk, said in court.

Deripaska’s office in Moscow referred queries to Terra Services. A lawyer for the U.K. firm declined to comment.

Deripaska is one of the highest-profile Russians caught up in waves of U.S. sanctions against the country since its 2014 annexation of Crimea and support for separatists in eastern Ukraine. Although some companies Deripaska formerly controlled have been removed from the blacklist, the billionaire himself remains under sanction, which means U.S. citizens and entities are prohibited from dealing with him.

The British warrant said that the owners would seek to destroy or conceal evidence if it wasn’t issued, according to filings in the London case.

Just days before the warrant was issued, the NCA conducted its own search of the storage unit to “assist a money laundering investigation.” The British search, authorized under legislation that allows for covert surveillance, should have been approved by a judge, Terra said in its filing. It’s unclear if the investigations are related.

Manafort and Deripaska fell out in 2008 over a deal to buy a cable company in Ukraine. Lawsuits filed by Deripaska in 2014 describe how Gates, Manafort’s deputy, failed to respond to requests for information on the investment around the same time. In September 2010, Deripaska asked Gates to account for the $18.9 million he’d invested, but the report was never delivered, according to court documents.

Documents unsealed in June 2018 showed that Manafort and his wife acknowledged on a 2010 tax return that they owed $10 million to Deripaska.

Deripaska handed control of Terra Services in January 2018 to an individual named Pavel Ezubov, whose name matches that of the billionaire’s cousin, Russian media group RBC reported last year. The firm owns several properties in San Tropez and Paris, RBC said. It has just six employees, according to a U.K. corporate registry.

--With assistance from David Voreacos and Yuliya Fedorinova.

To contact the reporter on this story: Jonathan Browning in London at jbrowning9@bloomberg.net

To contact the editors responsible for this story: Anthony Aarons at aaarons@bloomberg.net, David S. Joachim