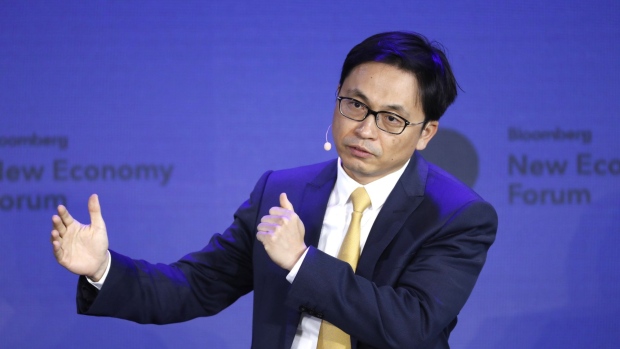 Pan Dong used to be a teacher at a university in Guangzhou, China. Fast forward two decades, she’s now one of the nation’s richest women.

The 55-year-old is Blue Moon Group Holdings Ltd.’s chairman and wife of its founder, Luo Qiuping. The soap maker, which in recent years has raced past foreign brands including Unilever Plc and Procter & Gamble Co. to become China’s top liquid-laundry detergent provider, raised $1.3 billion in Hong Kong’s biggest consumer initial public offering of the year. It priced at the top end of its marketed range last week.

With its shares opening up 16% on their Wednesday debut, Pan’s 77% stake in Blue Moon is now worth $8.8 billion, according to the Bloomberg Billionaires Index. A company spokesman didn’t respond to a request for comment.

A phone call jumpstarted the brand’s expansion and led to Pan’s riches.

When Pan and her husband rang Zhang Lei of Hillhouse Capital Management Ltd. about a decade ago to tell him they had developed one of China’s first liquid detergents, the company was a stable cash cow, but it was small. Zhang encouraged them to develop that market, according to a 2015 interview with the New York Times, and Hillhouse became their first outside investor.

After initially incurring losses due to higher product-development costs in an increasingly competitive space, the bet paid off. The soap maker became profitable again, and in 2020 it got another boost as the coronavirus pandemic pushed people to buy cleaning and disinfecting products.

“Blue Moon is a classic example of how a local brand beats multinationals in emerging markets,” Hillhouse’s Zhang said in his book “The Value,” referring to the company’s push into liquid detergents.

His hedge fund’s bet has proved lucrative, too. Hillhouse invested a total of $46 million in the detergent maker’s two funding rounds and its stake was worth $988 million at Blue Moon’s opening price, a 21-fold return, as per Bloomberg calculations. Entities linked to the firm will subscribe to at least 34.5 million shares in the IPO to avoid diluting the stake, the prospectus indicated.

Known as China’s P&G, Blue Moon’s revenue grew to HK$7 billion ($909 million) last year and earnings almost doubled to HK$1.1 billion, according to the prospectus. The Covid-19 outbreak that led to lockdowns and shut many physical stores sent profit up 39% in the first six months of 2020, with almost 60% of the sales coming from online channels.

Pan, a Canadian and Hong Kong citizen, graduated from Wuhan University with a master’s degree in organic chemistry in 1987 and worked as a teacher at another Chinese college for the following decade. She joined Blue Moon in 1994, two years after the launch of its first branded cleaning product, and later acquired stakes from Luo and his father to “better deploy” her management and technological knowledge and help the company capture tax benefits for mainland enterprises with foreign investment, according to the prospectus.

With China being one of the first nations to manage to control the coronavirus outbreak, investors have been favoring stocks powered by its recovering consumer industry. The retail portion of the Blue Moon IPO was more than 300 times oversubscribed, and other listings of companies linked to the sector have done well recently. Shares of bottled-water maker Nongfu Spring Co. have doubled since their September debut, and online drug store JD Health International Inc. jumped more than 55% on its first day of trading earlier this month.

Michael Kan, an investment director of Centaline Securities, notes that the exuberance of Hong Kong’s IPO market is a cause for concern as some traders are focusing too much on short-term bets. That said, he points to Hillhouse’s “excellent” track record in the long run.

“The fund house always helps the companies it has invested in grow their businesses with appropriate strategies and cooperate with the right partners to explore new frontiers,” he said, adding that he will keep an eye on Blue Moon’s results.