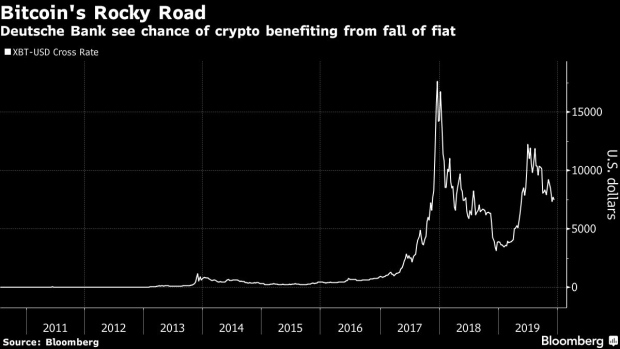 (Bloomberg) -- After a rough start to life, crytocurrencies may be on the cusp of a breakout decade if Deutsche Bank AG’s contrarian call comes true.

Rising doubts about the sustainability of government-backed currencies amid higher inflation could drive more people to digital assets, Deutsche Bank strategist Jim Reid wrote in the firm’s “Imagine 2030” report on 24 alternative ideas for the next 10 years.

“The forces that have held the current fiat system together now look fragile and they could unravel in the 2020s,” Reid wrote. “If so, that will start to lead to a backlash against fiat money and demand for alternative currencies, such as gold or crypto could soar.”

Reid highlighted the runaway inflation and surge in gold in the 1970s following the end of the gold-backed monetary system. Rather than give credit to central banks for clamping down on inflation, the strategist pointed to the rise of China as the “biggest suppressors of global inflation of the last four decades” thanks to a massive surge in the supply of labor.

But that’s ending as the peak in the working age population was reached over the past decade. Thus, governments may increasingly shift policy toward workers left behind by globalization, adding fiscal spending instead of extending aggressive monetary policy, which has mostly benefited owners of capital and assets over labor, according to the report.

“If and when labor costs rise at the margin rather than fall, there will likely be a more difficult environment for policy makers,” Reid said. “And where politicians are worried about elections, it is likely that inflation will be the casualty.”

Eventually, inflation could become more and more embedded and doubts about state-sponsored money may increase, he wrote, leading to rising demand for alternative currencies.

“Will fiat currencies survive the policy dilemma that authorities will experience as they try to balance higher yields with record levels of debt?” Reid said. “That’s the multi-trillion dollar (or Bitcoin) question for the decade ahead.”

To contact the reporter on this story: Randall Jensen in New York at rjensen18@bloomberg.net