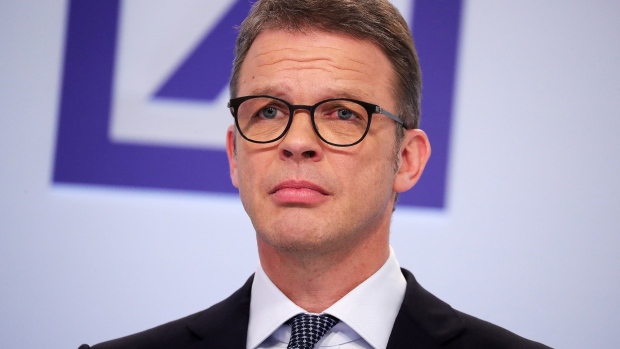 (Bloomberg) -- For over a decade, one of the biggest financial scandals in German history has been snaking its way through Deutsche Bank AG.

Now, it’s approaching the highest levels of the German lender, with three key figures -- investment banking chief Garth Ritchie, former co-Chief Executive Officer Anshu Jain and his predecessor Josef Ackermann -- among 80 suspects linked to the bank and being probed by prosecutors in the so-called Cum-Ex affair, according to people familiar with the matter. For CEO Christian Sewing, who’s trying to turn the tide at Germany’s biggest bank after years of painful missteps, the escalation couldn’t come at a more precarious time.

Deutsche Bank is just one of many firms tied to the scandal, and the company maintains it didn’t act as a buyer or seller in the Cum-Ex deals. But the German lender profited from servicing customers that specialized in such transactions, according to people familiar with a German criminal investigation and an internal review seen by Bloomberg.

The finance giant had Cum-Ex clients that were loaned as much as 1 billion euros ($1.13 billion). During the height of the activity from 2008 to 2011, the bank took on clients that did nothing but such deals. A German probe found that Deutsche Bank even had a profit-sharing agreement with one firm that specialized in the transactions, according to people familiar with the findings. Among key figures involved in Cum-Ex work at Deutsche Bank, the people said, were Simon Pearson and Joe Penna, former managers who left the bank in 2009.

Deutsche Bank said that it never “participated in an organized Cum-Ex market, neither as a short seller nor as a Cum-Ex buyer.” It acknowledges that “as a major participant in the capital markets, Deutsche Bank was involved in Cum-Ex transactions of its clients” and said it is cooperating with the authorities.

“I was not personally involved in any Cum-Ex activity, and I am very confident that the investigation will show no personal wrongdoing by me,” Ritchie said in an email sent by the bank.

The controversial transactions -- widely reported to have cost German taxpayers more than 10 billion euros -- involved the sale of borrowed shares just before a company was due to pay a dividend. They allowed multiple investors to claim a refund on a dividend tax that was paid only once, according to German authorities. The practice was named after the Latin term cum/ex, meaning with/without, because the stocks were sold with and delivered without a dividend payment.

Numerous probes are ongoing. On Monday, Frankfurt prosecutors raided residential and business locations in an investigation unrelated to Deutsche Bank.

More: The Tax Dodge That Cost the German Treasury Billions of Euros

Deutsche Bank profited by lending money to buyers and shares to short sellers in the transactions, said the people, asking not to be identified because the probe isn’t public. The company also acted as a custodian and issued tax certificates needed for the deals, they said.

In 2008, Pearson was a managing director and Penna a director in Deutsche Bank’s London-based prime finance unit, according to an investigation the bank commissioned by Freshfields Bruckhaus Deringer LLP into its dealings with Nummus Financial GmbH. The law firm’s report, delivered in 2013 and seen by Bloomberg News, describes how Pearson brought on Nummus as a new client. Nummus specialized in Cum-Ex deals, and the men would have known the nature of its work because of the material they reviewed, according to the report.

Nummus went through a customer acceptance procedure, with Deutsche Bank’s legal department reviewing the contracts and the credit risk management unit conducting due diligence, including a review of “the business model and the trading strategy,” according to the report. The bank granted the new client a credit rating, and as part of its prime brokerage arrangement, provided 15- to 20-fold leverage on the fund’s capital of 32.7 million euros, the report said.

Authorities grew suspicious and refused to pay Nummus any tax refunds, according to a public filing. Last year, Deutsche Bank settled a probe by Frankfurt prosecutors into the Nummus work for 4 million euros. Cologne prosecutors are still probing the bank’s activities related to other investors and declined to comment.

Pearson and Penna left Deutsche Bank in 2009 to join Ballance Group, an asset management company that advised funds and other market participants who engaged in Cum-Ex transactions. The men’s work and Ballance’s role are described in detail in an indictment Cologne prosecutors filed in April against two former London bankers who worked at Ballance, according to the people.

A German lawyer for Pearson declined to comment. Attempts to reach Penna were unsuccessful. Some Ballance units were dissolved. Others, which were renamed, don’t have listed phone numbers.

Deutsche Bank acted as the prime broker for several Cum-Ex investors that were Ballance clients, according to the probe’s findings. It granted one fund a loan of 942 million euros for the trades; another, 743 million euros. Deutsche Bank also had a profit-sharing agreement with Ballance in 2009 and 2010 under which it received 30% to 50% of the money the asset manager made, according to people familiar with the findings of the Cologne probe.

After Penna and Pearson joined Ballance, Pearson maintained close ties with his former employer. Ballance Overseas Management Ltd., a London-based entity where he was a director, became a client of Deutsche Bank’s prime brokerage in February 2010 and had borrowed about 404 million euros within months, U.K. filings show. The company traded only with Deutsche Bank and other Ballance Group companies, according to a Ballance report for the year ended October 2010.

Ballance also hired several other Deutsche Bank employees to work on the Cum-Ex deals. Some of the company’s units organized shares used by short sellers, cooperating with staff remaining at Deutsche Bank who are also being investigated, according to the people.

German authorities say that dozens of banks and brokerages in London and other global financial hubs helped investors siphon off billions of euros from the national treasury with the transactions over the course of a decade. A 2012 reform of the tax code stopped the practice, and the current debate centers on whether the trades were legal before that. Prosecutors have been conducting a criminal probe into some of the biggest names in European and U.S. finance, looking at the roles played by banks, law firms and others.

To contact the reporters on this story: Karin Matussek in Berlin at kmatussek@bloomberg.net;Donal Griffin in London at dgriffin10@bloomberg.net