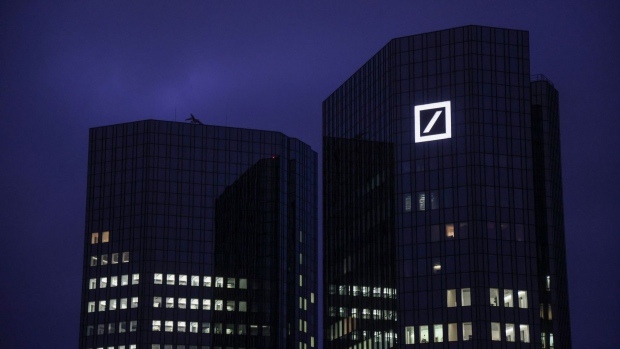 The headquarters of Deutsche Bank AG in the financial district of Frankfurt, Germany, on Monday, Jan. 24, 2022. Deutsche Bank turned the blame on an ex-client for crippling losses it suffered investing in risky foreign exchange derivatives the German lender sold. Photographer: Alex Kraus/Bloomberg , Bloomberg

(Bloomberg) -- Deutsche Bank AG is weighing an increase to its bonus pool of about 15% as the German lender navigates the twin challenges of competing for talent while keeping costs under control.

The overall expansion in payouts masks strong divergence in variable compensation across the bank, according to people familiar with the matter. While above-average increases are earmarked for parts of the investment bank, staff in some back office units may see substantial drops, the people said, asking not to be identified discussing the private information.

High bonuses for the investment bank, led by Mark Fedorcik, come as the division generated a pretax profit of 3.4 billion euros ($3.8 billion) in the first nine months of 2021 -- almost double the amount achieved by the lender’s three other operating divisions combined. The unit is likely to continue playing an outsized role for Chief Executive Officer Christian Sewing even as trading activity is set to recede.

Sewing has said he wants to pay top performers “competitively” amid demand for investment banking talent that Fedorcik recently described in a Bloomberg interview as “the highest I’ve ever seen.” That competition has led Wall Street rivals including Goldman Sachs Group Inc. and JPMorgan Chase & Co. to ratchet up bonuses and incur some of the highest expenses in years.

Deutsche Bank is boosting pay after heeding calls by the European Central Bank a year ago to keep bonuses in check. The German lender and other European banks received unprecedented relief to help weather the pandemic, prompting calls from the regulator for restraint.

The lender is pulling all the levers to boost profitability to the level of 8% return on tangible equity that Sewing has vowed to deliver this year. The investment bankers and traders who stand to earn the biggest bonus rises have become an increasingly important pillar of that pledge, even though Sewing promised at the outset of his tenure that he would reduce the lender’s income reliance on them.

Spiraling costs are probably one reason why Deutsche Bank is unlikely to increase bonuses quite as much as its U.S. competitors. While bankers who advise companies on acquisitions and raising capital can expect as much as 20% more at the German lender, their peers at JPMorgan and Goldman Sachs may see bumps of as much as 40% to 50%, Bloomberg has reported.

Soaring variable compensation for staff adds to the unexpectedly high expenses at Deutsche Bank that forced Sewing last year to abandon an overall cost goal. The investment bank’s strong revenue growth, which is far ahead of internal planning assumptions, allowed him at the time to maintain his most important promise to investors, the profitability target.

The lender has already signaled payments for top performers and new recruits as a “cost headwind.” The expected increase in payouts comes as the lender’s unionized employees clamor for a 5%-wage increase in the face of inflation that recently hit a 30-year high in Germany.