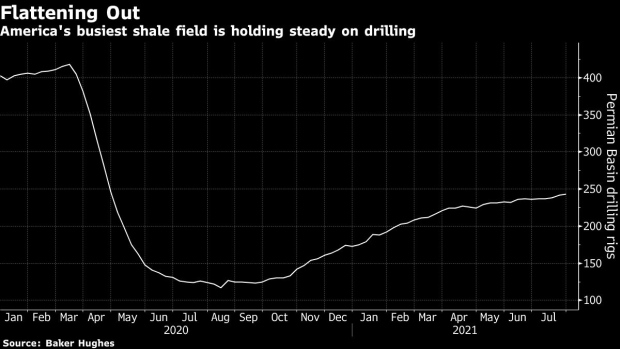 (Bloomberg) -- Devon Energy Corp. and ConocoPhillips are among potential suitors studying Royal Dutch Shell Plc’s portfolio of Permian Basin oil fields, which could be worth as much as $10 billion in a sale, people familiar with the matter said.

Chevron Corp. is also among companies considering bids for the assets, which are largely located in West Texas, the people said. Suitors have been invited to Shell’s data room to examine information on the business, the people said, asking not to be identified discussing confidential information.

The Permian Basin of West Texas and New Mexico is the world’s busiest shale patch and accounts for roughly half the activity in U.S. oil fields today. Deliberations are ongoing, and there’s no certainty any of the suitors will decide to proceed with formal proposals, according to the people.

Representatives for Chevron, ConocoPhillips, Devon and Shell declined to comment.

The sale comes amid shifting strategies at oil and gas majors looking to less carbon intensive operations. BP Plc last year completed the sale of its business in Alaska to Hilcorp Energy Co., while in early 2021 Equinor ASA agreed to sell its interests in the Bakken field in Montana and North Dakota to Grayson Mill Energy for $900 million.

In May, Shell was ordered by a Dutch court to slash its emissions harder and faster than planned after losing a court case against Milieudefensie, an arm of Friends of the Earth. Shell said it will appeal the verdict, while asserting a willingness to accelerate its transition to a net-zero emissions business.

Meanwhile, investors in the U.S. have been pushing for more company tie-ups within each of the shale basins as a way to cut costs and get more bang for their drilling buck. Bonanza Creek Energy Inc. bought its Colorado rival Extraction Oil & Gas Inc. for about $1 billion, while Midland, Texas-based Diamondback Energy Inc. announced a pair of deals late last year to bulk up in the Permian.

“Consolidation is important, it’s going to keep happening,” Matthew Kaes Van’t Hof, chief financial officer at Diamondback, said earlier this month at the Hart Energy conference in Fort Worth. “There’s going to be a few large basin champions in each basin, majors included.”

(Updates with other in-basin deals in penultimate paragraph)