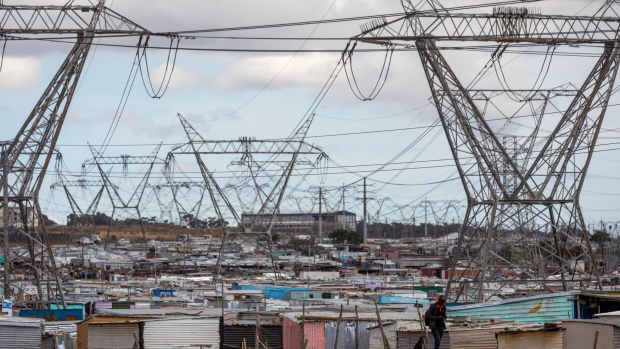 (Bloomberg) -- South Africa’s Eskom Holdings SOC Ltd. is increasing power cuts in order to prevent a total collapse of the grid as issues grow from lack of imports to breakdowns at its coal-fired plants.

The utility, which generates almost all of the nation’s electricity, plans to increase the power it cuts from the system to 3,000 megawatts on Monday due to a “significant shortfall” of generation, Chief Executive Officer Andre de Ruyter told reporters in an online briefing. Even the best-performing coal stations have experienced recent breakdowns and Eskom is tracking vessels with deliveries of diesel used to run turbines typically during peak demand periods.

“Extraordinary measures” are needed to improve the system, De Ruyter said. “The performance has been quite disappointing.”

There are few elements of the grid that aren’t affected by issues, putting South Africa on track for a record year of power cuts. That’s curbed economic activity in the most industrialized country on the continent. The rand also weakened amid the escalation of electricity shortages.

Units expected to be online have been delayed, even at its newest station, while thousands of megawatts of generation are at risk as they run at reduced levels with various leaks and other problems, Chief Operating Officer Jan Oberholzer said. About 36% of total installed capacity is unavailable due to breakdowns and some planned maintenance and power cuts could be increased to 4,000 megawatts if more units are lost, he said.

Even emergency reserves are under pressure. Open-cycle gas turbines, that are burning two million liters of diesel a day, must manage fuel use carefully. Eskom is tracking the arrival of vessels that will replenish supplies and trying to expedite it, Oberholzer said.

The utility is also dealing with an escalation of labor issues at the utility as one of the biggest unions representing workers there, the National Union of Metalworkers of South Africa, is demanding a 15% wage increase.

“Eskom is still in a loss-making situation” and costs must be managed across the board, De Ruyter said.