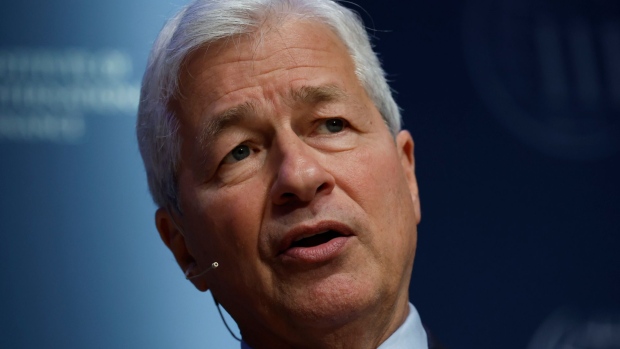 Jamie Dimon, chairman and chief executive officer of JPMorgan Chase & Co., speaks during the Institute of International Finance (IIF) annual membership meeting in Washington, DC, US, on Thursday, Oct. 13, 2022. This year's conference theme is "The Search for Stability in an Era of Uncertainty, Realignment and Transformation." , Bloomberg

(Bloomberg) -- China is set endure a significant slowdown, which will impact the rest of the world, former US Treasury Secretary Steven Mnuchin said on the second day of Saudi Arabia’s Future Investment Initiative in Riyadh.

“Clearly China is going to have a significant slowdown and that will have an impact on the world economy,” said Mnuchin, now managing partner at Liberty Strategic Capital. “Things are going to get worse before they get better.”

Mnuchin also said he expects 10-year Treasury yields to peak at 4.5%. Treasuries rallied sharply Tuesday amid signs that Federal Reserve rate hikes are beginning to take a toll on the economy.

On Tuesday, top Wall Street bankers offered up a litany of warnings that recession in the US and Europe is increasingly likely with geopolitical risks further darkening the horizon into 2023.

Meanwhile, Saudi Arabia’s energy minister, Prince Abdulaziz bin Salman, defended OPEC+’s decision to cut oil production, while criticizing major importers for trying to tame prices by selling down their inventories. His comments came after OPEC and its partners irked the White House earlier this month by opting to slash crude output by 2 million barrels a day.

Executives have descended on Riyadh for this year’s event, despite deepening fissures in US-Saudi relations. In a slowing global economy, the kingdom is the fastest growing in the Group of 20 thanks to its oil wealth. Crown Prince Mohammed bin Salman is sitting on his first budget surplus since coming to power, allowing him to channel billions of dollars into assets globally and to plan ambitious construction projects.

“There was to a large extent a denial about the risks we’re seeing today, during previous IMF meetings but that changed during last week’s meetings in Washington,” he said.

Speaking about the region, he said “there’s a lot of commitment to reform and that reform is continuing.”

“We need to be watchful and provide whatever support for the region,” he added.

Mnuchin said people underestimated economic risks previously but now “we’re overestimating those risks. All of a sudden everybody has turned incredibly negative.”

“I think you are going to see inflation in the US will begin to come under control and it will probably be a two-year period,” he said. “But you’re going to begin to see that tightening relatively regularly. And I think people are overestimating the Federal Reserve’s actions just as they underestimated it.”

Investcorp, the Middle East’s largest alternative asset management firm, and the private equity arm of the Fung brothers’ family office are setting up a fund to invest in mid-cap companies across China’s Greater Bay Area.