Discover the revolutionary technologies that have farmers and investors looking at CubicFarms - BNN Bloomberg
{{ currentBoardShortName }}
Markets
As of: {{timeStamp.date}}
{{timeStamp.time}} 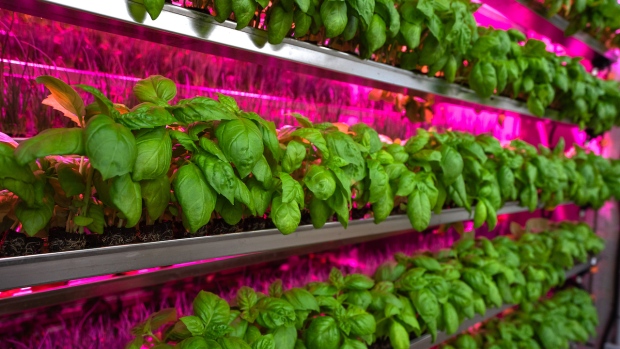 With population growth, climate change and massive supply-chain disruptions caused by the COVID-19 pandemic, global food production is facing a perfect storm. United Nations statistics indicate the world’s population will increase from the current 7.7 billion to 9.7 billion by 2050 and could peak at nearly 11 billion around 2100.

Feeding the world's population down the road is a daunting prospect, especially since 100 per cent of the world’s available agricultural land and water are already being used.

Agriculture also faces trial by fire as rising global temperatures drive droughts in many countries including Morocco, Uganda, Ethiopia and parts of the U.S. like California, where 80 per cent of the state was in the grip of an extreme drought in 2014. Extreme heat not only depletes our arable land, but also dramatically increases food insecurity.

Wildfires are causing major disruptions in farming operations in countries like Australia and Turkey. Even the coast of British Columbia wilted this summer under a heat dome that saw temperatures hitting +40°C in Greater Vancouver, cooking crops in surrounding agricultural areas.

Increasingly, farmers and food producers are looking to technological solutions to overcome these growing challenges. A report by the Food and Agriculture Organization of the United Nations cites food system transformation as one of the key aspects in solving the problems of climate variability and extremes, economic slowdowns and downturns as well as increasing food security.

Founded by farmers, CubicFarms has the technology to feed a changing world

New technological innovations in the agriculture space are something both farmers and investors get excited about. One ag-tech company that's generating excitement is CubicFarm Systems Corp. (TSX: CUB). Headquartered in Langley, B.C., the company was founded by farmers to find innovative indoor growing solutions.

The inspiration for the company came in 2008 when Jack Benne, founder of Bevo Farms, and his son Leo Benne, visited a farm in Puerto Rico devastated by a hurricane. They came away with a fresh perspective on how difficult it was to grow produce outdoors in unstable conditions.

By the time their flight home landed, they'd sketched out plans for an indoor system that could grow fresh produce 365 days a year anywhere in the world. The company has never forgotten those roots.

"We're a technology company founded by farmers, so everything we do is through the lens of what works on a farm.” — Dave Dinesen, CEO, CubicFarm Systems Corp.

The automated, hydroponic growing system uses 95 per cent less water, no pesticides or herbicides, while providing predictable and consistent growing.

One HydroGreen Vertical Pastures™ module saves 1.9 billion litres of water annually compared to traditional field farming — enough to give a glass of water to everyone on the planet. It also replaces over 200 hectares of farmland, the equivalent of 380 football fields.

"If we're going to meet the food needs of a rapidly growing population, we need technology to let us do far more with the land and the water that we have," Dinesen explains.

Even though about 70 per cent of all agricultural land is being used for some aspect of livestock production, farmers face feed shortages and volatility in forage prices. Doing more with that huge percentage of agriculture land to increase production and give more certainty and independence for farmers is key to producing more food to feed the planet.

CubicFarms' HydroGreen Grow System does just that. Developed by Dihl Grohs for his ranches in South Dakota, Utah and Missouri, the indoor system is based on low-maintenance and reduced water usage. CubicFarms acquired HydroGreen in 2019.

"The beauty of the system is its simplicity," says Dan Schmidt, President of HydroGreen.

"All it requires is the seed, the light, some water and an environment anywhere in the world. When you can control the temperature of the environment, you can grow a crop like sprouted barley in six days."

The HydroGreen system uses 90 per cent less water than irrigated fields and replaces 500 acres of farmland using automated, modular HydroGreen Vertical Pastures™. Energy and water efficient, the system can yield up to 365 harvests per year while producing zero waste. All without pesticides or fertilizers, which have soared in price due to less supply and stronger demand.

Because the system uses sprouted barley rather than hay, 100 per cent of the plant can be used for feed, increasing the nutritional content of the crop.

"Much of the nutrition is not in the green part of the plant. It's in the root bed," says Schmidt.

"By processing all the plant material, we're able to provide that nutritional content and mix it into the feed ration. The animals go after it like it was candy."

All this technological innovation has led CubicFarms to lead a new category of indoor ag-tech for farmers: local chain ag-tech. The model combats climate change, addresses supply-chain food dependence and defines a sustainable and localized commercial-scale model for farming and food production in any climate.

"What the world has now is long-chain agriculture — everything we eat has to be brought in from somewhere far away. If anything disrupts that supply chain, then we're vulnerable," says Dinesen. In North America, the average head of lettuce travels 2,000 miles from where its harvested, resulting in tremendous amounts of waste and produce that doesn’t last.

"Local chain ag-tech is the solution to long-chain agriculture. We need to grow what we eat where we live. In the case of HydroGreen, local farmers can reliably feed livestock 12 months a year. It's localizing agriculture through technology."

By using technologies like those developed by CubicFarms, more produce and feed can be produced locally and more efficiently on significantly smaller parcels of land — it can occupy the least productive land and continue growing year-round, during heatwaves or freezing temperatures. At the same time, the HydroGreen system reduces greenhouse gas emissions (GHGs), water use, and energy consumption combat the climate change that's disrupting agricultural production.

How much produce? One CubicFarms System module can produce 1,900 heads of lettuce or 5,500 plugs of basil a week. If it's microgreens you want, that one module will yield over 5,700 kilograms annually.

Local chain ag-tech creates a network of producers that will complement each other, while supplying local food supply needs. Think of it as the Uber of agriculture. Instead of relying on the agricultural equivalent of a single large cab company, multiple local suppliers can feed into regional networks.

"What you'll see is the development of regional players that service their areas. With our technologies, each crop type will have local farmers serving those local regions with the crops they grow. We can eliminate that long distribution chain and dependence on things far away," says Dinesen.

"For instance, if I have a herd of cattle and I don't have the pastureland to feed them adequately, I don't have to get my hay or fodder from far away. I could literally get it down the road, from a local supplier growing commercially using one of our Vertical Pastures™."

By breaking down that long-chain model, CubicFarms’ technologies will benefit local economies, keeping dollars close to home rather than sending them overseas. They support existing independent farm operations, open the door to new producers and will create more agricultural jobs at the local level.

Consumers will also get the benefit of having access to high-quality, locally grown produce and farmers will have a secure supply of quality feed. And CubicFarms focuses on quality, not just quantity.

"Because we're able to provide the plant with optimal conditions, it responds by being its most delicious and its most nutritious. It will also live the longest because you're growing it locally. You can leave the root on, so you literally eliminate waste yet maximize texture, colour and nutrition," says Dinesen.

"All of these things produce a premium product and because of our automation, we’re able to deliver it at a traditional price — it doesn't have to be more expensive, and I think that's what the world's been waiting for. We can actually deliver head-to-head with what comes out of a field."

CubicFarms attractive to both farmers and investors

With its suite of technologies, CubicFarms is equipped to help farmers handle the many issues facing them. By producing consistently high-quality produce and feed, the company's systems eliminate unpredictability and localize production.

Farmers and consumers will also benefit from expanding local chain ag-tech and increased productivity. CubicFarms' patented growing modules are significantly more productive than traditional growing methods and they’re scalable, with new systems announced with 96 modules called a FreshHub. With 54 patented jurisdictions and 97 installed to-date, the company has a strong sales pipeline offering farmers access to technology to solve the challenges they face.

CubicFarms has also been attracting the attention of investors since graduating to the TSX in September. The company has $33 million in sales orders with deposits, representing 176 modules pending installation with a strong sales pipeline in its fresh produce and livestock feed divisions. In addition, the company recently announced a new certified dealer program for the HydroGreen technology, with commitments for 54 modules valued at over CAD$10 million.

"Microsoft is a world-class tech platform on which to operate all of our systems," says Dinesen.

"We don't want to reinvent the wheel, so we selected Microsoft as the underlying platform that lets us move very quickly." Sustainability initiatives are important to Microsoft. “We’re proud to work with CubicFarms on their controlled environment ag-tech systems and cloud services to help support farmers growing more fresh food locally, in a sustainable way, anywhere in the world,” states Suzanne Gagliese, VP, Global Partner Solutions, Microsoft Canada. CubicFarms is one of the first controlled environment agriculture companies working with Microsoft cloud services.

To launch the local chain ag-tech category, the company is hosting a virtual event called CubicFarms AMPLIFIED on October 21st, showcasing how agriculture technology can solve the challenges facing farmers and consumers alike.

"CubicFarms AMPLIFIED is our opportunity to share everything we've been talking about. We believe it's our time to make a statement that we can have a significant impact on sustainable agriculture in this world," says Schmidt.

"Our team has put together a top-shelf quality experience and we will have people from around the world attending," he explains.

"People will be fascinated with what someone like Chris Hadfield has to say from his unique perspective, as only an engineer and astronaut can bring. I know people are really going to enjoy what he has to say about ag-tech."

To learn more about CubicFarms, visit their website here.

Watch the interview below.

Follow CubicFarms on social media for the latest updates: