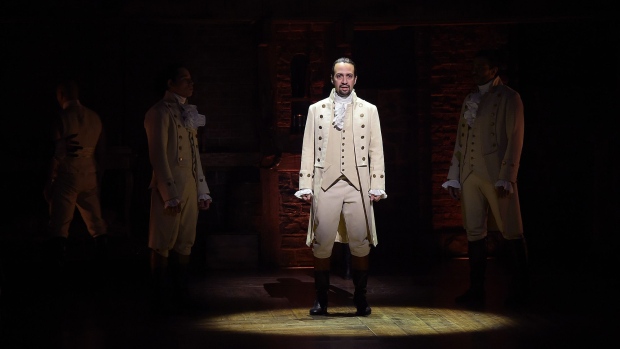 Walt Disney Co.’s new Disney+ streaming app was downloaded more than half a million times over the weekend after the service’s July 3 premiere of a filmed version of the musical “Hamilton.”

The US$7-a-month Disney+ generated 513,323 new mobile downloads worldwide from Friday to Sunday, including 266,084 in the U.S., according to the market research firm Apptopia. The global numbers are 47 per cent higher than the average weekend in June, while the domestic results were 72 per cent greater.

Disney paid a reported US$75 million for the film, which was shot with the original cast in 2016. The musical, based on the life of the nation’s first secretary of the treasury, Alexander Hamilton, has been a huge hit on Broadway. The company originally planned to release it in theaters next year, but put the film on its streaming service right before the July 4 holiday in the U.S., a time when many people were stuck at home due to the coronavirus.

The total number of downloads could be higher. The Apptopia tally represents mobile only, and doesn’t include people who acquired the app via the Disney website, Roku or other TV-linked devices. It also doesn’t include India and Japan, where Disney+ was rolled into existing products, Apptopia said. The Disney app was the most downloaded for the week ended July 5.

Disney last said the service, launched only in November, had more than 54 million subscribers worldwide. “Hamilton” was one of the top trending conversations on social media over the weekend, including discussions of the spittle coming out of actor Jonathan Groff’s mouth as he sang. Groff played King George.

The “Hamilton” debut follows other stage-to-streaming productions, including Netflix Inc.’s airing of Bruce Springsteen’s Broadway show last year. RadicalMedia, which produced the film version of “Hamilton,” is already at work on a movie adaptation of David Byrne’s “American Utopia” for HBO Max.

--With assistance from Lucas Shaw.