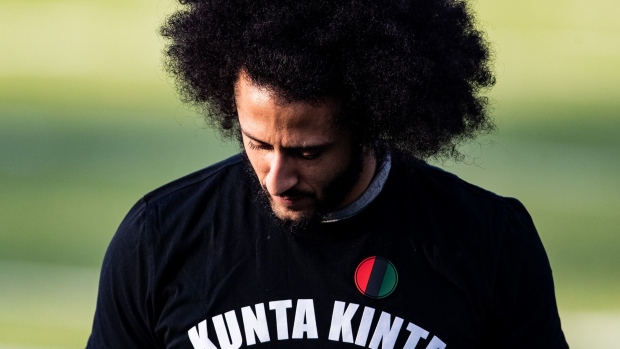 Walt Disney Co. will produce a series about the life of football player and activist Colin Kaepernick, part of a new overall deal between the media giant and the quarterback.

Disney will get first crack at new projects from Kaepernick’s Ra Vision Media, which produces work that explores race and social injustice. That will begin with the project about Kaepernick’s own life, that of a star athlete turned civil-rights activist.

Kaepernick was a quarterback for the San Francisco 49ers when he began kneeling during the national anthem to protest racism in the U.S. The move inspired many of his peers, but also angered large swaths of the population --including President Donald Trump -- who took it as a sign of disrespect toward the flag. Kaepernick opted out of his contract before the 49ers could release him, and no team has been willing to sign him since then, turning him into the latest sign of what his fans say is systemic racism.

Disney hails the deal as part of a broader effort to develop stories from the perspective of Black and Brown communities. Kaepernick’s stance has turned him into a face of the civil-rights movement -- and without an NFL career to pursue -- he is using his platform to tell stories.

He previously agreed to make a show about his early life for Netflix Inc., and his publishing label has a partnership with blogging platform Medium. He is also joining that company’s board.

The Disney agreement ties one of the NFL’s biggest media partners to one of its highest-profile critics. Disney, the owner of ABC and ESPN, airs “Monday Night Football” and devotes hours of radio and television time to dissecting every aspect of the league.

“The Walt Disney Co. remains committed to creating diverse and inclusive content that resonates and matters,” Executive Chairman Bob Iger said in a statement. “Colin’s experience gives him a unique perspective on the intersection of sports, culture and race.”