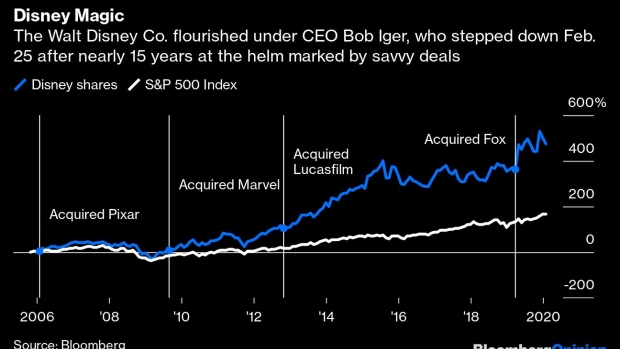 (Bloomberg Opinion) -- What a day for the Walt Disney Co. to let out its biggest secret.

Just as investors were engrossed by news updates on the worsening coronavirus and its convulsive effect on global financial markets, Disney delivered another jolt by announcing longtime CEO Bob Iger was stepping down. Huh? It was the last thing shareholders saw coming. The company’s choice wasn’t even who most people expected. Bob Chapek, the head of Disney’s theme parks business, is taking over, effective immediately. Iger will remain chairman through to the end of 2021.

It’s the most significant change to happen to the entertainment giant in more than a decade. Iger had become almost as much the face of the company as Walt Disney was himself, and was responsible for building it into the globally admired brand and content powerhouse that it is now. While Iger, at 69 years old, had been inching closer to retirement, it wasn’t supposed to come until next year. Shares of Disney fell 6% in after-hours trading, as investors tried to pick their jaws up off the floor.

Anyone who read Iger’s memoir, “The Ride of a Lifetime,” which was released last year, might have been led to believe that another top Disney executive, Kevin Mayer, was next in line for the keys to the Magic Kingdom. Mayer oversees Disney’s new streaming-TV operations — the very business at the center of the new Disney. It’s become the focus of attention both inside and outside the company in recent months as Disney entered the industry’s streaming wars with the wildly successful launch of Disney+. Iger made repeated mentions of Mayer in the book, and few of Chapek. Mayer is “a master strategist and dealmaker,” Iger wrote. “A CEO couldn’t ask for a better strategic partner.” Partner.

The question now is, will Mayer stay, after being passed over for what might be the most enviable job in corporate America? Even though Iger, during a conference call held for investors and analysts Tuesday, tried to soothe concerns about the seemingly abrupt move, it’s hard not to wonder about a larger backstory, one where there’s potentially some internal friction. As Iger kept putting off retirement over the years, other successor candidates seemed to get sick of waiting and left.

Not choosing Mayer does raise an even bigger question: How do Iger and the company view the future of Disney? If only for their respective roles, Chapek in some ways represents Disney’s past, while Mayer represents the new Disney.

All that being said, Chapek is a widely respected leader, and this certainly wasn’t a decision anyone at Disney would make lightly. From one Bob to another, Iger said Tuesday that it was the right time to transition to a new CEO and that Chapek “is absolutely the right person.” There’s little reason to question that. And it should be remembered, when Iger was first named CEO, investors weren't so sure about him, either.

There is one telling nugget from Iger’s book that could be seen as presaging today’s turn of events. Passing over all his transformative dealmaking — buying Pixar, Marvel, Lucasfilm and then the big one, Rupert Murdoch’s 21st Century Fox — Iger instead highlights opening Disney’s Shanghai park as one of the defining moments of his career. Chapek played a big role in that. Chapek “oversaw the largest capital expansion in the history of our parks,” Iger said Tuesday, highlighting the Shanghai opening, as well as the “Star Wars” Galaxy Edge attraction at its U.S. parks and the company’s large fleet of cruise ships. Iger added that he and the board had identified Chapek as his likely successor “quite some time ago.”

Iger isn’t saying goodbye just yet. He explained that part of the reason for stepping aside now is so that he can focus more on the creative side of Disney. What he wants to accomplish more than anything before he leaves is “getting everything right creatively.” Content is more important than ever as Disney almost single-handedly props up the box office and lure fans to its streaming services, all the while integrating the Fox assets and keeping alive its traditional media networks that still drive the bulk of its profits.

But that’s still only part of the reason for choosing to step down now. Whatever the case, it’s the end of an era for Disney; Iger has left an indelible mark, and left Disney better than it was before him. Chapek has big shoes to fill.