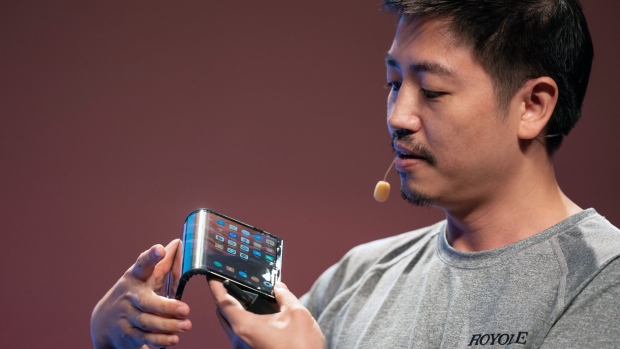 The startup seeks funding to expand its sales and marketing and research facilities, the people said, requesting not to be named because the matter is private. It had originally planned to raise that amount via a private financing round at a valuation of about $8 billion, people familiar with that deal said in March. But the Chinese company is now tapping U.S. markets after liquidity tightened during a downturn in China’s venture capital sector, the people said.

It’s unclear what timeframe the company’s looking at, the people said. A Royole representative declined to comment.

Royole is regarded as one of a coterie of Chinese technology startups working to dismantle the decades-old image of China as a clone factory by leading in design and innovation. Like Huami and Insta360, these upstarts aim to take advantage of home bases in China close to where devices are manufactured, developing products faster and more cheaply.

Founded by Stanford alumni Bill Liu, Peng Wei and Xiaojun Yu, Royole needs capital to plow back into research and expand production. The company, valued at about $5 billion in a previous funding round, invested 11 billion yuan ($1.6 billion) into a flexible display plant in Shenzhen that commenced production in June. Royole is working with Airbus to install displays in planes and also collaborates with clothing, furniture and kitchen-supply customers. Royole has said it secured a deal with Louis Vuitton that will see the two companies putting flexible screens on handbags of the future.

Its full line of products encompasses head-mounted displays intended for use as so-called mobile theaters and other wearable flexible displays. The company even has a smart writing pad that it sells on Amazon.com, JD.com and in stores across China, the U.S. and Europe.

(Updates with details on Royole’s inception from the fifth paragraph)

To contact the editors responsible for this story: Edwin Chan at echan273@bloomberg.net, Colum Murphy