In one sense, Amazon.com Inc. founder Jeff Bezos and his ex-wife, MacKenzie Bezos, are nothing special.

By finalizing their divorce this month, they join the millions of Americans now splitting up in middle age. The rate of divorce after age 50 has doubled in the U.S. since 1990.

The billionaire exes are unique, though, in escaping divorce with their finances relatively unscathed. He’s still the world’s richest person, worth US$123.1 billion, and she has a US$39.7 billion fortune, according to the Bloomberg Billionaires Index. Amazon shares climbed 19 per cent since they announced the end of their 25-year marriage in January.

Splitting up after age 50 -- often called “grey divorce” -- may be particularly hazardous to your emotional and financial health, far worse than doing so at younger ages. A wave of new research is quantifying the damage.

“It’s a grim picture,” said Susan Brown, a Bowling Green State University sociology professor and co-director of the National Center for Family & Marriage Research, which has generated many of the new findings. According to one study, people who’ve gone through a grey divorce report higher levels of depression than those whose spouses died.

The economic effects are even more stark. As more and more Baby Boomers end marriages, sometimes for the second or third time, they’re wrecking their finances on an unprecedented scale.

“Getting a grey divorce is a major financial shock,” Brown said.

If you get divorced after age 50, expect your wealth to drop by about 50 per cent, Brown and her colleagues found in yet-to-be-published research that analyzed a long-running longitudinal survey of 20,000 Americans born before 1960. That’s not really a surprise: After all, any divorce involves dividing a family’s resources.

But incomes also collapse after a grey divorce, particularly for women. The researchers looked at standard of living -- income adjusted for household size -- reflecting the fact that a solo adult needs less income than a single parent with two children still at home. They found that when women divorce after age 50, standard of living plunges 45%. That’s about double the decline found in previous research on younger divorced women.

Older men see their standard of living drop 21 per cent after a divorce. Previous studies have found a small or negligible effect of divorce on younger men’s incomes.

Even more troubling is that older people aren’t bouncing back from these financial shocks. Brown and her colleagues were able to follow survey respondents’ finances for up to a decade post-divorce.

Late in their careers, older Americans simply don’t have time to undo the financial destruction that a divorce causes. Women who spent years at home caring for children find it difficult to re-enter the workforce.

By retirement age, they can be in dire straits. Another 2017 study by Brown and colleagues found U.S. women 63 and older who went through a grey divorce have a poverty rate of 27 per cent, more than any other group at that age, including widows, and nine times the rate of couples who stay married. 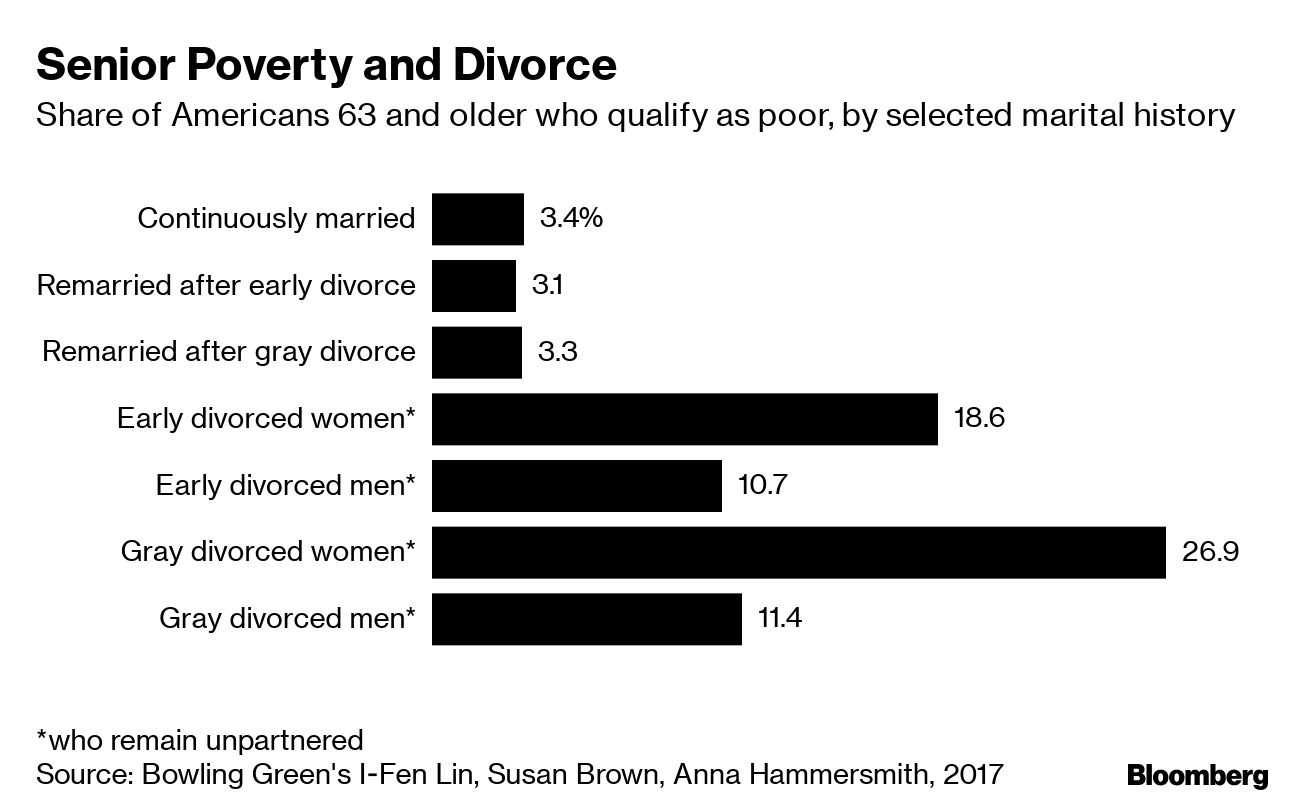 Even the most successful people can get thrown off balance by divorce. A 2016 paper in the Journal of Financial Economics found that both splitting up and getting married hurt the performance of hedge fund managers.

“Marriage and divorce are deeply personal events that distract fund managers from their investment duties,” the researchers wrote. Managers underperform by 4.3 per cent a year in the six months around a breakup, and continue to lag behind by 2.3 per cent annually for up to two years after the divorce.

Presumably divorces could also harm chief executive officers and the companies they run, but researchers get differing results depending on how they study the topic. New research, relying on detailed data on companies in Denmark, found divorce only hurts performance in a statistically significant way for small firms, with fewer than 10 employees. One explanation is that, at big companies, other employees can cover for a stressed and distracted CEO.

“The smaller the firm, the more important the CEO becomes,” said Aarhus University professor Ingo Kleindienst, one of the researchers involved. “The larger the firm, the more professional it is and the more likely that other executives will compensate for his decline in cognitive sharpness.”

Divorcing CEOs may even find ways to game the system. Research by George Mason University law professor Jordan Neyland suggests a CEO’s divorce can influence their compensation. Data show large companies raise CEO salaries and other benefits by more than US$2 million on average after a divorce. The reason for the higher pay may be to help the CEOs (overwhelmingly men) cover the costs of cash settlements with their spouses (overwhelmingly women) without selling shares. “It looks like the board takes some corrective measures after the divorce,” he said. 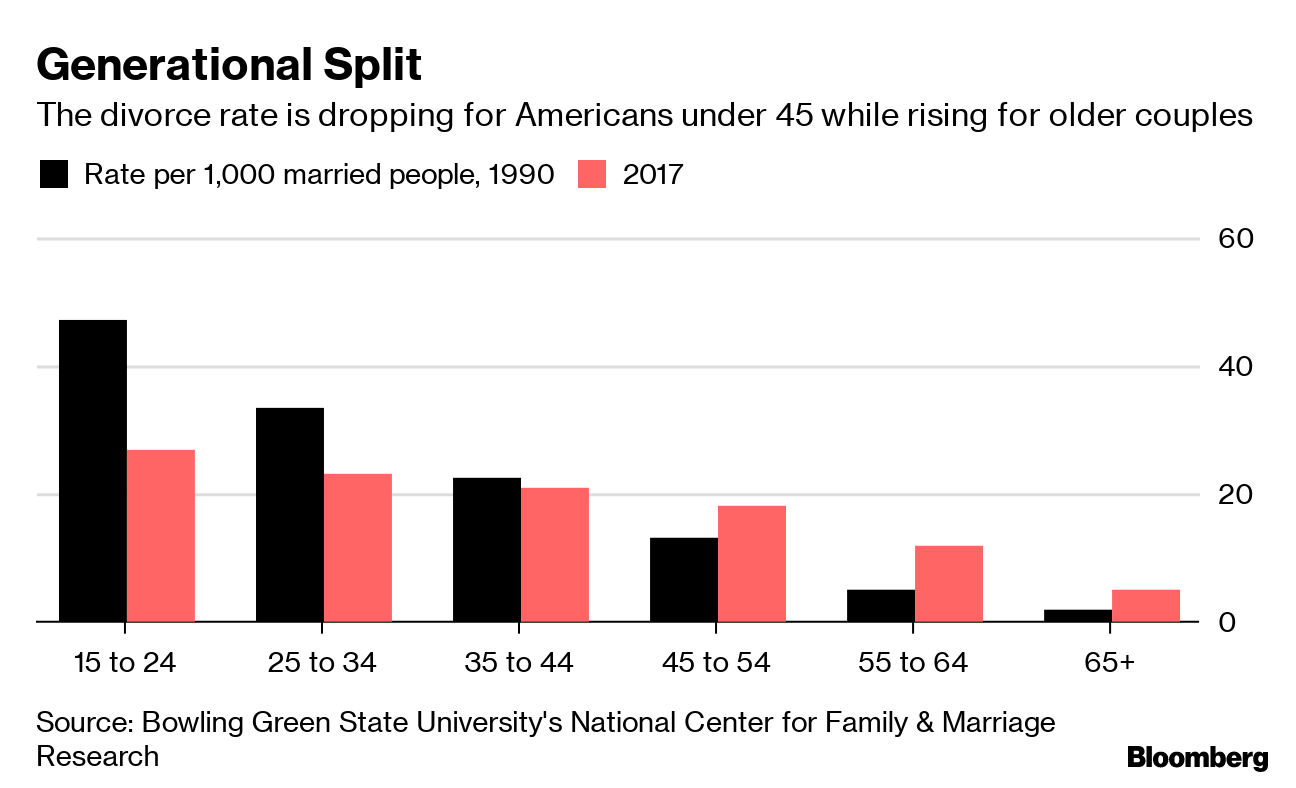 The overall U.S. divorce rate is dropping even as the number of divorces after age 50 surges. The reason is a generational divide: Americans in their 20s, 30s and 40s are delaying and, in some cases, skipping marriage. Those who do get hitched are likelier to stay together. Meanwhile, Baby Boomers -- who caused the divorce rate to surge starting in the 1970s -- are continuing to divorce at higher rates as they age.

The Boomers’ propensity to break up, combined with the aging of the U.S. population, means the U.S. will see many more grey divorces in the years ahead. Even if the rate of grey divorce stays the same, more than 828,000 Americans will be divorcing each year by 2030, Brown and her colleague I-Fen Lin estimate. That’s almost 30 per cent more than in 2010, and four times more than the 206,000 older people who divorced in 1990. 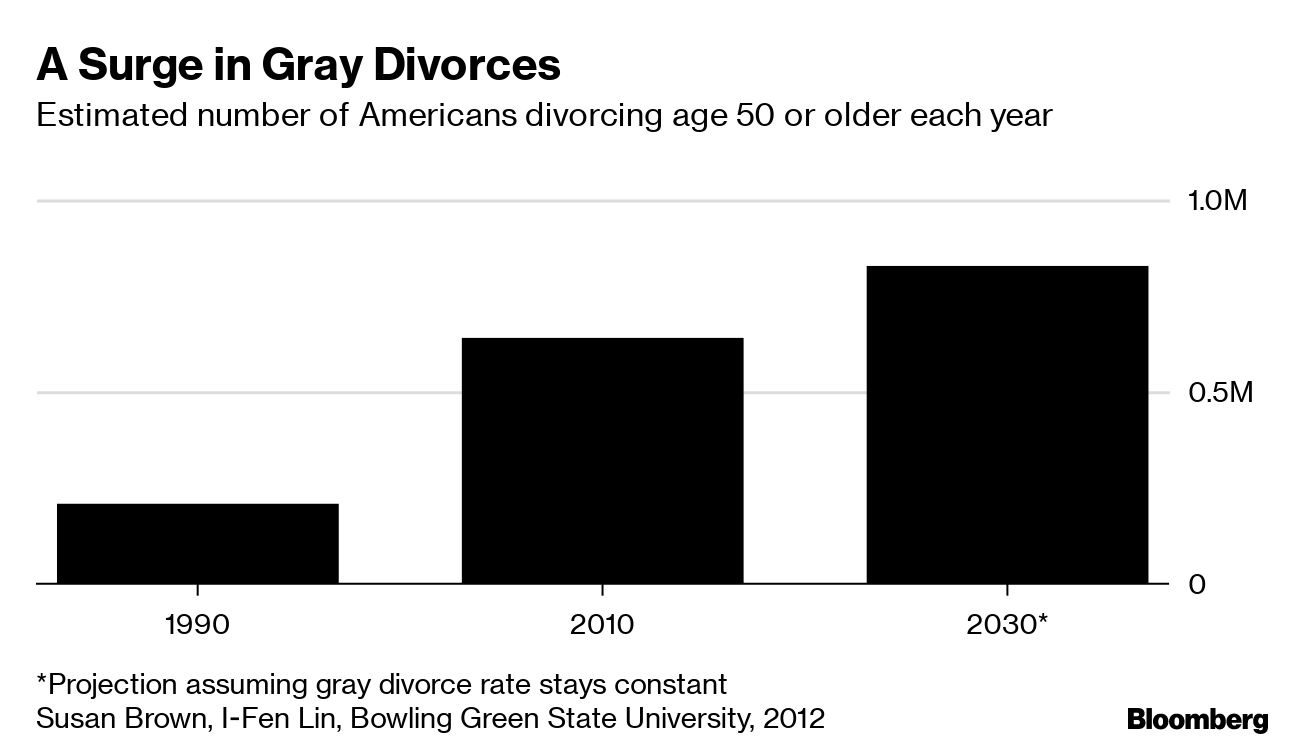 The best way to recover from divorce, research suggests, is to find a new spouse or partner. After a grey divorce, it takes about four years for depression to return to earlier levels, the Bowling Green study shows. (It takes longer, about eight years, for widowed people’s depression levels to dissipate.) But remarrying or re-partnering will end depression almost immediately.

Finding someone else can also restore your financial situation. But that’s not always easy. In a paper published in January in the journal Demography, Brown and other researchers estimate that about 22 per cent of women and 37 per cent of men re-partner in the decade after a grey divorce.

Women have a harder time for a couple of reasons. They live longer than men, who tend to look for female partners significantly younger than they are. As heterosexual women age, therefore, the pool of possible partners shrinks. Then again, some women may prefer to stay single. Several studies have shown that older women often enjoy their independence and are less interested than men in re-partnering.

Still, the economic effects of grey divorce on women can be brutal. Grey-divorced women age 63 and older face a poverty rate of 26.9 per cent, compared with 11.4 per cent for grey-divorced men and only about 3 per cent for couples who stayed married or re-married after a divorce.

Social Security is supposed to keep seniors out of poverty, but its rules leave behind many divorced women. The program lets women access their ex-spouse’s benefits only if the marriage lasted at least 10 years. That’s not enough time for many grey-divorced women, who receive an average annual Social Security benefit of US$10,995, the lowest of all groups studied by Brown and her colleagues.