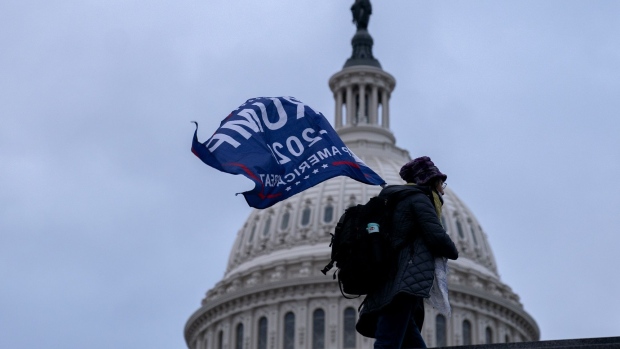 A demonstrator carries a "Trump 2020" flag outside the U.S. Capitol in Washington, D.C., U.S., on Wednesday, Jan. 6, 2021. The House and Senate will meet in a joint session today to count the Electoral College votes to confirm President-elect Joe Biden's victory, but not before a sizable group of Republican lawmakers object to the counting of several states' electors. Photographer: Stefani Reynolds/Bloomberg , Bloomberg

(Bloomberg) -- Two Iranian men were charged for interfering in the 2020 presidential election by hacking confidential U.S. voter information from at least one state election website and sending threatening emails to Democrats purportedly from the white supremacy group Proud Boys.

The emails, which the U.S. disclosed last year, warned tens of thousands of Democratic to vote for Donald Trump for president, according to an indictment released on Thursday.

“This indictment details how two Iran-based actors waged a targeted, coordinated campaign to erode confidence in the integrity of the U.S. electoral system and to sow discord among Americans,” Matthew Olsen, the recently-confirmed head of the Justice Department’s national security division, said in a statement.

“The allegations illustrate how foreign disinformation campaigns operate and seek to influence the American public,” Olsen added. “The Department is committed to exposing and disrupting malign foreign influence efforts using all available tools, including criminal charges.”

The hackers also targeted Republican senators and House members, people on Trump’s presidential campaign, White House advisors and members of the media “falsely claiming that the Democratic Party was planning to exploit ‘serious security vulnerabilities’ in state voter registration websites to ‘edit mail- in ballots or even register non- existent voters.’ In the False Election Messages, the members of the conspiracy claimed to be a “group of Proud Boys volunteers.”

In addition to the threatening emails, hackers stole information on about 100,000 voters from one state’s “misconfigured” computers, DOJ said.