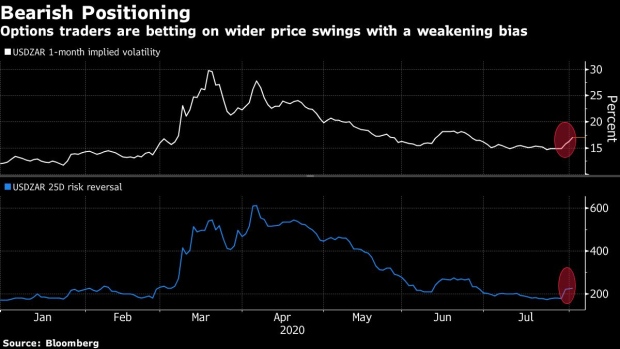 The coat of arms of South Africa sits on the security ribbon of a South African 100 rand banknote in this arranged photograph in Pretoria, South Africa, on Wednesday, Aug. 14, 2019. The rand ended a tumultuous week on a positive note, gaining against the dollar for a second day and heading for its first weekly advance in four as technical indicators suggested recent declines are overdone. Photographer: Waldo Swiegers/Bloomberg , Bloomberg

With the dollar heading into what is traditionally its best month of the year, the outlook for South Africa’s rand has taken a turn for the worse.

The world’s second-most volatile currency has weakened during August in four of the past five years, for an average decline of 5.3%, according to data compiled by Bloomberg. The dollar, by contrast, has gained on average 0.4% in August against a basket of peers.

That spells trouble for the rand. The currency is already in the midst of its longest losing streak since February. According to trading data and technical indicators, that may just be the beginning.

Options traders are hedging against wider rand swings, with a bias toward weakness. One-month implied volatility for the rand versus the dollar climbed to a six-week high on Monday. The premium of contracts to sell the currency over those to buy it, known as the 25 delta risk reversal, widened to 225 basis points.

Analysts have stayed reasonably bullish on the rand since the Covid-19 meltdown in mid-March. But the spot-market rate has now weakened beyond the median forecast, and also breached the 50-day moving average, which in the past tended to augur further declines. The probability of the rand ending the year at the median forecast of 17 per dollar is 43%, according to Bloomberg’s forecast model based on options pricing.

Some of the highest yields in emerging markets haven’t been sufficient to stop the bleeding in the nation’s debt markets. Non-residents have reduced their holdings of government securities to the lowest level in more than eight years after selling a net 54 billion rand ($3.1 billion) of the debt this year. If a 10-year yield above 9% didn’t offer enough of a premium at a time when the rand was strengthening against the dollar, it’s hard to see what will entice investors back into the market.