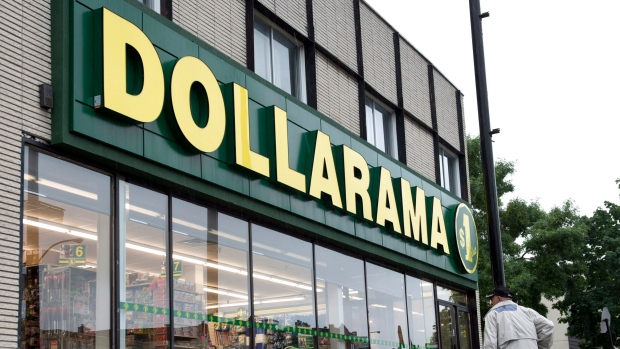 A Dollarama store is seen in Montreal on June 11, 2013. , THE CANADIAN PRESS/Paul Chiasson

Dollarama Inc. declined to provide its annual financial guidance for its 2021 financial year due to COVID-19 pandemic, but said it expects to see some negative impacts.

The discount retailer typically includes a fiscal year outlook along with its fourth-quarter and full-year results, which the company released Wednesday.

"Due to the exceptional circumstances stemming from the global COVID-19 pandemic and our limited visibility on future performance, we have suspended this practice for now," said chief financial officer Michael Ross in a conference call with analysts.

The retailer will revisit that decision ahead of its first-quarter earnings release, he said, "should the situation normalize by then."

The company is currently in the midst of its first quarter, which ends May 3. It started with strong same-store sales and store traffic momentum, carried over from the fourth quarter, he said.

When the coronavirus outbreak ramped up in late February to mid-March, Dollarama saw a surge in transactions and the amount customers purchased as they stocked up on household cleaning supplies, food and craft supplies, among other things, said Ross.

"After this bump in sales, which lasted a few weeks, transactions began to level off," he said, as increasingly strict social distancing measures from various governments resulted in mass shutdowns of retailers.

Dollarama was deemed an essential service in areas where non-essential businesses were ordered to shut operations, he noted, and roughly 54 of the company's 1,291 stores remain closed temporarily. Most of these, he said, are in shopping malls in Quebec that have been asked to close down.

The retailer's mall locations that remain open record the lowest traffic now -- down more than 50 per cent in the last eight days of March compared to the same time the previous year, he said. The company's stores outside of malls that have street access are not seeing this same traffic dip.

Dollarama anticipates same-store sales to be negative for the rest of the current first quarter, he said, thanks to the reduced traffic and mall closures beyond the retailer's control.

The company is tracking costs related to the outbreak, he said, nearly all of which are labour-related due to pay increases and scheduling additional employee hours to comply with measures to help prevent the spread of COVID-19.

Dollarama is paying its store, distribution centre and warehouse employees an extra 10 per cent between March 23 and July 1, said chief executive Neil Rossy, and has added an extra full shift at every store for a safety and sanitization co-ordinator who is responsible for controlling the number of people in the store and cleaning tasks.

Dollarama will provide a figure for costs related to the outbreak when it releases its first-quarter results in June.

The company is doing its best not to raise prices on any products, said Rossy, but the drop in value of the loonie and increases to some raw material costs will have an impact at retail at some point in the future. Ethyl alcohol, for example, rose in price about 10 or 15 per cent over the last week, he said. It is one of the main ingredients in antibacterial gels, which are in extremely high demand.

"We will do our best to push it off as long as we can."

The company's flow of goods into stores is keeping pace and reaching the levels required, said Rossy, adding the situation has stabilized in its supply chain.

Its overseas suppliers, including those in China, have come back online after halting production for a number of weeks in February and continue to ramp up production weekly.

"The important thing is that we don't foresee any material supply chain issues from a direct sourcing standpoint when it comes to the vast majority of products sourced from China, and we are effectively back to business as usual in terms of volumes," Rossy said.

When asked if he expects any material issue from the disruption in China, Rossy said the company is currently shipping at the exact same pace as last year.

The financial guidance suspension came as the company reported its fourth-quarter profit rose compared with a year ago.

Same-store sales for the period grew two per cent, or 3.8 per cent excluding the impact of a calendar shift that saw the fourth-quarter of 2019 have one additional week.