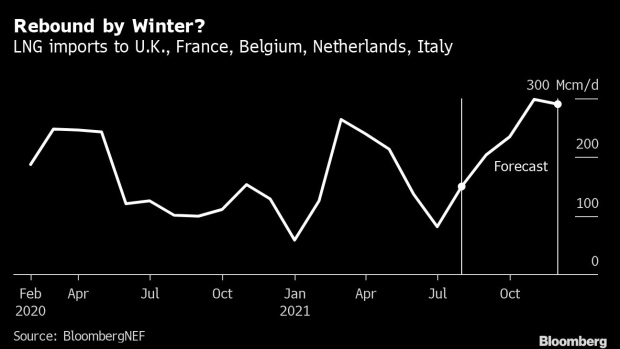 LNG supplies entering European grids in July fell to the lowest for that month in three years and the outlook for this month is even grimmer. Just one cargo is scheduled to arrive in the U.K. in August and traders who have the fuel stored in Spain are set to export six cargoes to capture higher prices in Asia.

All of that comes as Russia has been flowing less gas to Europe, setting the continent up for a very difficult winter should freezing temperatures hit. With inventories at their lowest level in more than a decade, gas prices in Europe have been volatile. Records have been broken day after day, with the market on edge for any sign of new supply coming through the yet-to-be completed Nord Stream 2 pipeline linking Russia and Germany.

“Europe needs to refill storage, but with the current fight for cargoes, it seems like the market will be very tight unless pipeline flows increase,” said Oystein Kalleklev, chief executive officer of shipowner Flex LNG Ltd. “We need to prepare for a very volatile winter depending on winter weather.”

Russia has been flowing less gas to Europe via Ukraine -- a key transit route -- and supplies into Germany through the Yamal-Europe pipeline crossing Belarus and Poland also took a hit after a fire at a Gazprom PJSC facility earlier this month. The Russian gas giant said this week it was overwhelmed with record demand both abroad and in Russia, where it needs to refill storage sites depleted beyond normal last winter.

Europe gets more gas from Russia than from the continent’s top producers. With domestic output in decline and the giant Groningen gas field in the Netherlands possibly closing three years ahead of schedule, the continent is becoming a lot more dependent on the vagaries of the global gas market to get the LNG it needs to keep homes heated and the lights on during the winter.

But tight supplies in Asia mean countries from China to Japan and Korea have been willing to pay more, luring even the supplies stored in Spanish tanks. Demand for LNG in Asia will remain strong through the rest of the year, Mark Gyetvay,  deputy chief executive officer of Russian LNG producer Novatek PJSC, said in an earnings call.

It’s not just demand that’s picking up. Gas supplies from Norway have been disrupted this year due to heavy maintenance after pandemic-induced delays. LNG production has also faced challenges, with numerous terminals from Trinidad & Tobago to Nigeria and Egypt also under-performing.

Supply disruptions aren’t “long-term structural issues” and will get sorted out, according to Jessica Uhl, chief financial officer of Royal Dutch Shell Plc, the biggest LNG portfolio player. Imports into Europe are set to rebound in the fourth quarter due to more supplies from the U.S., Oman and Australia, BloombergNEF forecasts. Morgan Stanley is already expecting gas prices in Europe to ease as more LNG arrives in the continent.

“As Asian demand peaks in the summer, demand will start to go down in the autumn, so finally Europe may attract some spot LNG back and this might give Europe a breather in October,” Ronald Smith, senior oil and gas analyst at BCS Global Markets in Moscow, said by phone. “And if we have a very warm October we can keep injecting gas in storage sites.”

The price arbitrage between Europe and Asia for October deliveries has nearly closed, which suggests that more cargoes will opt to head to terminals in the Atlantic, according to traders. However, that is likely to be too little too late for European utilities to sufficiently refill inventories before winter’s icy weather descends on the region.

Europe’s crunch could ease when Nord Stream 2 starts flowing gas. Futures in Europe plunged as much as 9.5% on Wednesday after the German gas grid published erroneous data on its website showing supplies via the pipeline. The market rebounded after Bloomberg News reported the error.

“I think the first line of NS2 might be getting tested and it is possible that some small test volumes may have been flown through it,” said Katja Yafimava, a senior research fellow at the Oxford Institute for Energy Studies. “But it is too much of a wishful thinking on part of the market to believe that the line is ready for commercial operations.”

It’s still unclear how much the pipeline will flow at the start and while Europe is set to get more LNG in October, supplies will tighten again from November as Northeast Asian buyers prepare for the peak winter heating season, London-based consultants Energy Aspects forecast. Demand in Asia-Pacific will rise by 2.8 million tons from December to January while supply in the region will only gain by less than half of that.

“This means that the region will need stronger flows from further supply sources,” Energy Aspects said in a report last week.

Futures “can’t get high enough to attract the LNG it needs to fill stocks and cool the market off,” said Melissa Lindsay, founder of LNG brokerage Emstream.

(Updates with price spread between Asia and Europe from 11th paragraph.)