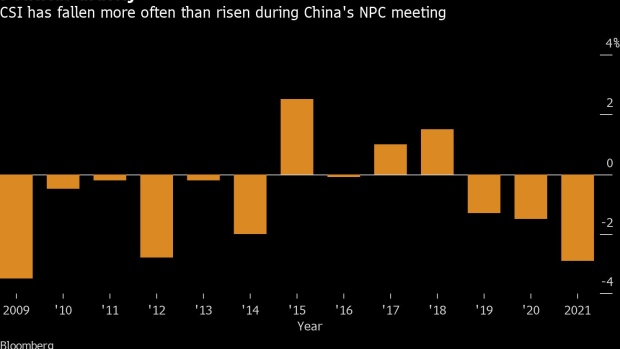 Families take a stroll down a riverside boardwalk in Shanghai, China, on Sunday, Jan. 16, 2022. China is likely to post its weakest economic growth in more than a year when it releases quarterly data Monday as it counts the cost of a deepening property market slump and disruptions from virus outbreaks. Photographer: Qilai Shen/Bloomberg , Bloomberg

(Bloomberg) -- Past experience with long holidays and major events can help explain an urge by onshore equity traders to pocket gains ahead of China’s annual Spring Festival, an extended holiday that begins Monday.

Turnover dropped to near an eight-month low on Wednesday, with Chinese investors winding back some of their riskiest trades. The benchmark CSI 300 Index has fallen 4.6% to start the year and is on the verge of entering bear-market territory. Investors in China have had their share of painful lessons about unpleasant surprises that could be in store after a long break.

For example, the CSI 300 plunged 5.8% in the first session following a week-long Labor Day break in May 2019, when markets reopened to a pair of tweets from Donald Trump that signaled escalation of the U.S.-China trade war. The gauge also took an 8% single-session hit after trading resumed following the 2020 Spring Festival during which the Covid-19 outbreak worsened.

Last year’s early stock rally came to an abrupt halt as China wrapped up its Spring Festival, which celebrates the Lunar New Year. Investors returned from the holiday to risk-off sentiment as a hawkish tone from the Federal Reserve sent stocks plunging globally. The CSI 300 tumbled about 14% in less than three weeks.

The Winter Olympics, which commence in Beijing next week during the holiday, also offer little cheer, if history is any guide. The Chinese equity gauge tumbled 12% during the 2008 summer games in the nation’s capital.

Even tightly staged political events may not offer comfort to investors. Despite some expectations of stability amid the Communist Party’s centennial last July, the equity benchmark actually delivered its worst monthly performance of 2021.

And since 2009, the CSI 300 has retreated more often than it advanced during the annual National People’s Congress meeting, which is usually in March and typically the most important political gathering of the year.

That said, state media are doing their part to reassure investors after the CSI 300 dropped to a 15-month low on Tuesday. A front page article in the Securities Daily on Wednesday urged institutional investors to “show some backbone” and “take up the responsibility of guiding value investment.”

So far that message has failed to stir much of a reaction, with most stock gauges advancing by less than 1% on Wednesday.