DoorDash Inc. posted record orders, but fell as investors focused on signs the food-delivery company will need to spend heavily to expand into new markets and sustain its pandemic-induced hyper growth.

Sales increased 83 per cent to US$1.24 billion in the three months ended June 30, the San Francisco-based company said Thursday in a statement. Analysts, on average, projected US$1.09 billion, according to data compiled by Bloomberg.

DoorDash reported a loss of US$102 million from a profit of US$23 million in the second quarter a year earlier. Analysts, on average, projected a loss of US$66.7 million. Expenses more than doubled to US$1.34 billion as the company increased investments to build out non-meal categories, expand internationally and boost driver recruitment. DoorDash said the spending will continue.

“We intend to increase our level of investment in these categories in the second half of 2021, with a particular near-term focus on expanding selection and improving the quality and consistency of our delivery experience,” the company said in a letter to investors. While DoorDash gave a rosy sales outlook for the current period, the company cautioned it expects a seasonal decline in new customers and order rates, adding that consumer behavior remains uncertain.

Food delivery’s triple-digit growth rate isn’t going to last over the long term, said Joe McCormack, a senior analyst at Third Bridge Group. For DoorDash, “to prop up growth a lot of focus is going to be placed on new frontiers like grocery, convenience and international markets.”

Shares declined as much as 7.5 per cent in extended trading after closing at US$188.21 in New York. The stock has gained 85 per cent since the company’s December initial public offering.

After indoor dining was shuttered by the COVID-19 pandemic, people flocked online to food-delivery platforms at a record pace. The shift catapulted DoorDash ahead of rivals like Uber Technologies Inc. and Grubhub Inc. and the company now commands 56 per cent of U.S. food-delivery sales, according to Bloomberg Second Measure. DoorDash has used its momentum to expand into other categories like pet supplies and groceries, betting that consumers will continue to pay for the convenience of having everything -- from meals to household items -- delivered to their doorsteps in minutes. The company, which raised US$3.37 billion in its IPO, also has ambitions of boosting its international footprint and made its entrance into Asia with a launch in Japan in June. 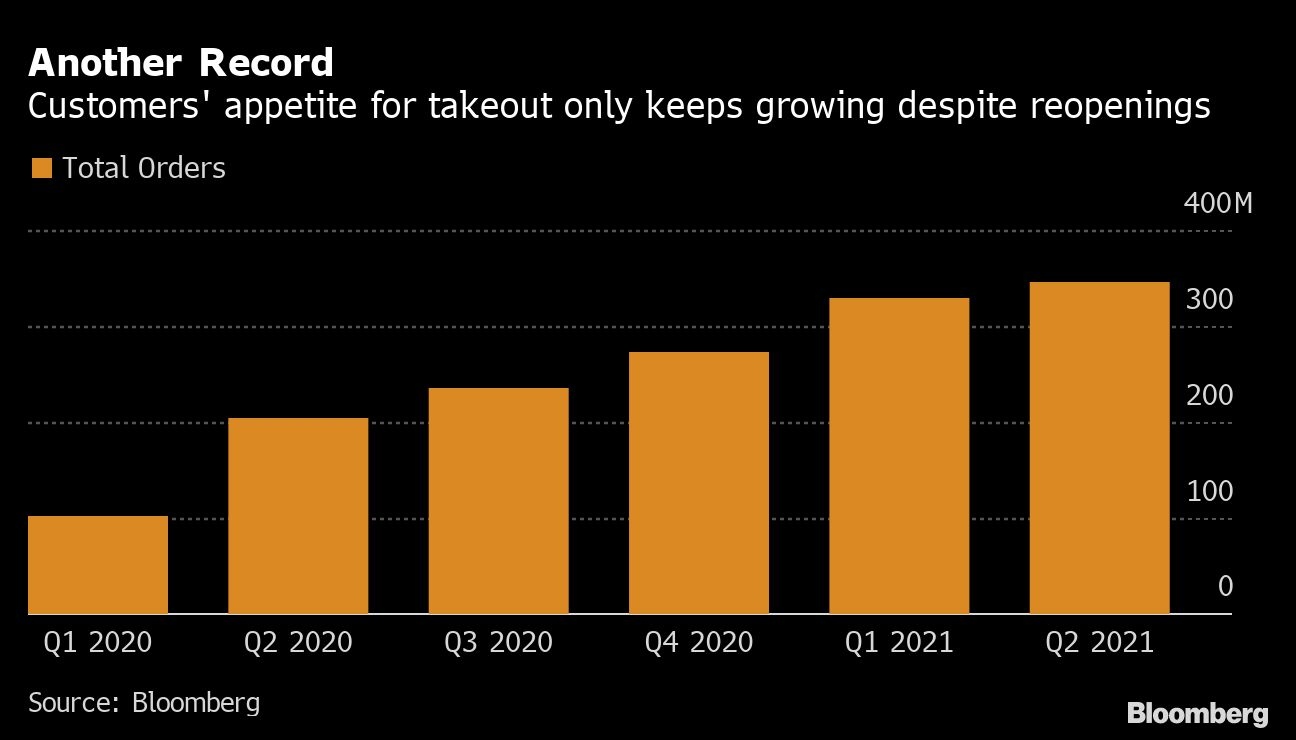 Customers placed 345 million orders in the quarter, a 69 per cent increase, with the gross value of those orders at US$10.5 billion. The company projected gross order value of US$9.3 billion to US$9.8 billion in the period ending in September.

“Consumers placed more orders in the second quarter than in the entire history of the company,” said Chief Financial Officer Prabir Adarkar. “We were pleased to see that growth remained strong even as restaurants reopened.”

DoorDash will increasingly see more competition from Uber, which redirected its focus to food delivery and expanded into grocery, alcohol and convenience delivery after the pandemic decimated ride-hailing demand. The rideshare giant last week reported robust growth in its delivery segment in the second quarter and signaled plans to double down on boosting membership in its subscription service Uber Pass. DoorDash offers a similar product with DashPass, which is used by about 25 per cent to 30 per cent of its 22 million users, according to Bloomberg Intelligence. Both companies’ membership offerings will be an area of focus going forward as the model has higher margins and could increase predictability in revenue once the pandemic subsides.

Price controls had a net negative impact of US$26 million on revenue, gross profit and adjusted earnings before interest, tax, depreciation and amortization in the quarter, DoorDash said in a letter to shareholders.

Food delivery companies faced intense scrutiny during the pandemic for charging commissions that can reach as much as 30 per cent of an order, squeezing small businesses’ already razor-thin margins. Cities imposed temporary caps on the fees last year in an effort to help struggling eateries keep a larger slice of profits during the pandemic. While some cities have lifted fee caps amid expiring COVID-19 emergency orders, other markets like New York have extended the measure to 2022 with lawmakers proposing a bill to make the restrictions permanent.