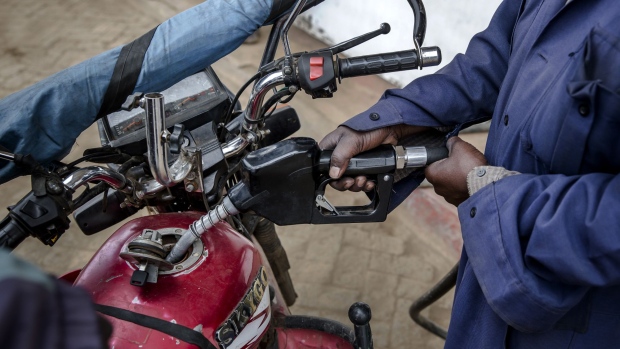 An attendant refuels a motorcycle taxi, known locally as a 'boda boda', at the Euro Petroleum petrol station in the Baba Dogo suburb of Nairobi, Kenya, on Wednesday, March 28, 2018. An impending 16 percent value-added tax on gasoline in Kenya will be passed on to consumers and increase inflation, practitioners told Bloomberg Tax. Photographer: Luis Tato/Bloomberg , Bloomberg

(Bloomberg) -- Fuel shortages at pump stations in Ethiopia are worsening, with motorists in the capital Addis Ababa waiting as long as eight hours to refill.

The situation could deteriorate later this month as the government plans to stop subsidizing gasoline and diesel. Commuters were seen waiting for hours before they could get rides, with vehicles forming long queues around gas stations in Addis Ababa and other major towns in the country.

“I have never seen such kind of diesel shortage before,” Kafiya Seid, a motorist in Addis Ababa, said on Tuesday. She’d waited five hours before getting a chance to refill. “Yesterday, there was almost no station in the city that was selling diesel.”

Fuel crises are spreading to more African countries after oil prices surged following Russia’s invasion of Ukraine. In Mozambique, transporters only ended a rare protest after the government pledged to subsidize fares. Shortages loom in Ghana as the central bank rations dollars needed to import the commodity.

The crisis in the Horn of Africa country, which also faces a shortage of foreign currency, has been exacerbated by marketers hoarding the product in anticipation of higher prices, said Tadesse Hailemariam, the chief executive officer of the Ethiopian Petroleum Supply Enterprise.