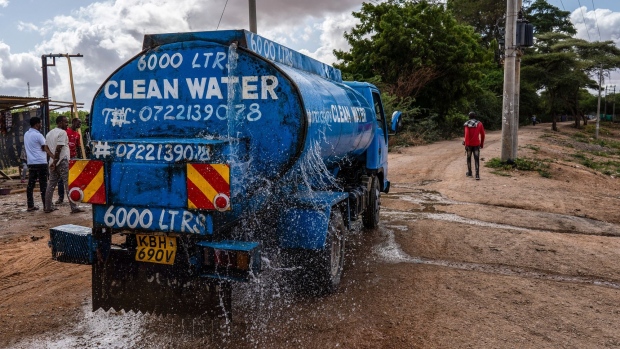 Mohammed Dawud, a community leader in the village of Nunow, eastern Kenya, stands before the leg of one of his camels that he lost to a drought in the area on May 20, 2022. , Bloomberg

(Bloomberg) -- Bloated livestock carcasses and sun-bleached bones litter the parched landscape around Garissa in eastern Kenya, the epicenter of a humanitarian and environmental crisis that’s unfolding across the Horn of Africa.

The worst drought in at least four decades and sweltering temperatures have depleted the area’s rivers and dams, driven thousands of destitute farmers from their lands and left those that remain reliant on pumps, boreholes and trucked-in water supplies. School attendance has plummeted and children as young as six are sent to get water, rolling yellow plastic drums for miles to collection points.

Aden Olow is among those who’ve been forced from their homes. After losing his 20th goat to the drought in late February, he set off from his village of Nunow near Garissa with the remains of his small herd in search of grazing in neighboring Somalia, leaving his wife Mumina Mohammed to look after their nine children. She’s had to borrow money from local store owners to support the family.

“It’s a very heavy responsibility to raise all these children alone. All of them need food and it’s very stressful,” Mohammed, 30, said in an interview. “Whenever there is rain, I’ll expect my husband will come back.”

The Intergovernmental Panel on Climate Change has warned that global warming, caused by greenhouse gas emissions, is leading to more extreme weather events and African nations are among those that will face heightened food and water insecurity. At least 16 million people are already at risk across Kenya, Ethiopia and Somalia, according to the United Nations, and the threat of famine is clearly evident.

While Kenya typically gets most of its rainfall between March and June and some showers between October and December, weather patterns have begun to change. Many areas haven’t had sufficient water since late 2020, and there is no indication when the drought will break.

Cereal production across northern Kenya and southern Somalia halved last year, and many cattle, goat and camel herds were decimated. Russia’s war on Ukraine has made a terrible situation even worse, pushing up grain and fuel prices, and raising aid costs for governments whose coffers had already been depleted by the coronavirus pandemic.

This month, Kenya waived import duty on 540,000 tons of corn to address what Treasury Secretary Ukur Yutani described as an impending crisis, and President Uhuru Kenyatta increased the minimum wage by 12% to cushion workers against rising prices of grain, cooking oil and other staples.

The government is doing its best to help more than 210,000 people impacted by the drought in the vicinity of Garissa, about 350 kilometers (217 miles) northeast of the capital, Nairobi, delivering water by truck to far-flung locations, according to Shukri Fiyat, a spokesman for the Kenya’s National Drought Management Authority.

“The work is continuous and draining resources,” he said.

But Sharmake Mohamed, who heads the North Eastern Conservancies Association, a group of wildlife conservancies in Garissa and nearby Wajir and Mandera, accused the authorities of not doing enough to safeguard the wellbeing of herders and their families, who account for about a fifth of Kenya’s 55 million people and occupy more than 70% of its land mass. More money needs to be invested in agriculture and mitigating against climate change, he said.

“This country is sitting on a time bomb,” Mohamed said. “We need to look at the repercussions of the pastoralist community being ignored.”

In Nunow, more than a quarter of the men have left and many children have left school because their families can’t afford the fees, said Mohammed Dawud, the chairman of the community of about 300 households.

At the village’s rudimentary primary school, teacher Maryan Ahmed has seen the size of her grade four and five class shrink to eight pupils, from 33 in August last year. Boys were prioritized for schooling and girls as young as nine were increasingly being married off for dowry payments or to ease economic pressure on their desperate families, she said.

The drought has also taken its toll on wildlife and the environment, with vast tracts of savanna having been reduced to red, sandy scrub-land. Emaciated giraffes have begun making their way to Garissa, a tranquil town of 165,000 people , in search of something to drink. Some locals provide them with buckets of river water while others chase them off their property.

Mumina Mohammed, the mother in Nunow, is sinking ever deeper in despair and is concerned that if help does eventually come, it will be too little, too late.

“I fear we’ll have no more rain until October,” she said. “Only god knows when I’ll have my family back together.”