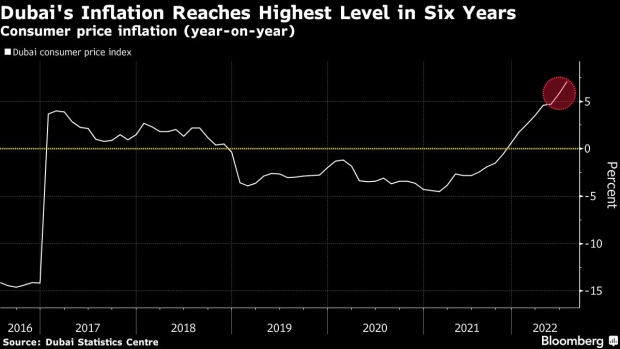 Shoppers visit the Dubai Mall shopping complex, operated by Emaar Properties PJSC, in Dubai, United Arab Emirates, on Sunday, Jan. 2, 2022. Dubai set out another expansionary budget for this year as the Middle Eastern business hub seeks to offset the impact of the coronavirus pandemic and keep its economy on a growth trajectory. , Bloomberg

(Bloomberg) -- Consumer prices in Dubai are increasing faster than in Singapore and approaching levels seen across much of Europe, capping a sharp reversal after almost three straight years of deep deflation.

Inflation in the Middle East’s business hub reached an annual 7.1% in July, the fastest since Bloomberg began compiling the data in 2016. The higher costs of transportation, recreation and entertainment, and food and beverages were the biggest contributors to the upswing, according to the city’s statistics authority.

The pick-up in Dubai, where inflation was negative as recently as in October, shows the oil-rich Gulf region is no longer immune to cost pressures plaguing much of the world economy. Local governments in countries like the United Arab Emirates, of which Dubai is a part, already set aside billions of dollars to support low-income citizens and stockpile key commodities.

While in part a reflection of a global rally in commodity prices, the outlook for prices in Dubai is also shifting as companies end a stretch of discounting and begin to pass on costs to consumers.

Fuel prices in the UAE, which are adjusted based on market costs, have surged about 80% since the start of the year. Other countries in the region subsidize fuel to varying degrees.

While the UAE government has imposed caps on essential items, food and beverage prices still jumped 8.8% in July on an annual basis. Housing prices rose 0.9% as the property market recovers from a years-long slump.

Dubai’s headline figures may decelerate in August, according to Abu Dhabi Commercial Bank PJSC, although the sting of inflation may be worse for consumers than the statistics capture.

“It takes time for the rental price increase to feed into the inflation data,” said Monica Malik, ADCB’s chief economist. “Many households are seeing greater increases that reflected in the CPI data.”