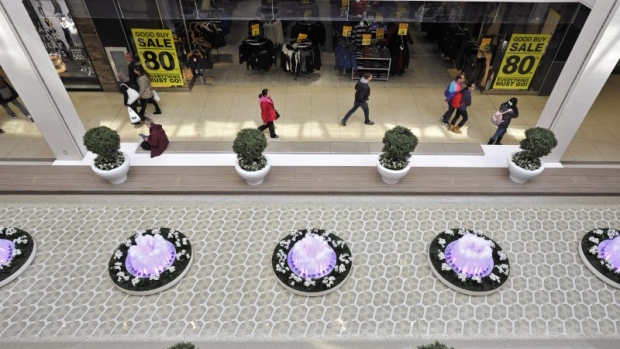 Malls were once a go-to shopping destination and a teenager's hang-out of choice, but now face an uncertain future as some of their biggest tenants lay off employees, file for creditor protection or hang a "closed" sign in the window and leave for good.

Beleaguered retailers have been quick to blame online shopping for their decline. But retail experts say scapegoating e-commerce is an oversimplification of a multifaceted problem: changing consumer tastes, demographic shifts, technological advances and other forces also add to their woes.

Retailers fret over e-commerce's growth, even though it actually constitutes a small percentage of shopping in Canada. In December 2017, e-commerce accounted for nearly $1.9 billion or 3.4 per cent of total retail sales in the country, according to Statistic Canada, suggesting annual growth of about four per cent from 2016.

While the online phenomenon has eaten into the bottom line of brick-and-mortar store chains, the rise of specialty retailers — such as standalone stores for brands such as Hunter boots and Canada Goose (GOOS.TO) jackets — and discount stores, including Walmart (WMT.N) and Dollarama (DOL.TO), are also luring shoppers away from former Canadian mall stalwarts like Sears.

The popularity of the sharing economy — including online trading platforms like Bunz — has lessened the need for buying new items, he said, while an increase in delivery services has weakened demand for bricks-and-mortar space.

It's also possible that Canada simply has built up too much real estate devoted to retail, he suggested.

The country boasts 94 square metres of retail space for every 100 people, according to data from the Shopping Centre Council of Australia, far more than the United Kingdom — at 44 square metres — and Germany — at 22 square metres. With the closure of anchor tenants such as Sears Canada — as well as entire shopping centres — Canada could be approaching more appropriate levels for a country with a comparatively small population, he said.

The demographic makeup of the country is also playing a role. Millennials, the age cohort loosely defined as being born in the 1980s and 90s, are increasingly important to retailers and those who aren't able to capture the attention of the tech-savvy generation tend to struggle.

Begic highlights how millennials don't gravitate to car ownership as much as their parents did, making them less likely to drive to a mall and more likely to shop online or stick to local stores.

They also prefer to spend more money on experiences such as travel over material things, he said.

Millennials will also ignore stores that don't cater to the experiences they want, said retail analyst Bruce Winder, part of a trend in consumer preferences that have forced mall planners and retailers to reinvent their spaces to attract shoppers.

Toronto's Yorkdale mall seems to have cracked the code for drawing in consumers with premium services, Winder suggested.

Yorkdale features high-end shops and corresponding services, like personal styling. It doubled down on food offerings — which draw in shoppers and keep them inside longer — bringing in a Jamie Oliver restaurant and more recently, Canada's first Cheesecake Factory. The mall also generates buzz with Instagram-worthy events like hosting Fashion Santa, who provides an opportunity to snap selfies with the swoon-worthy, hipster version of Old Saint Nick.

The strategy seems to be paying off, as Yorkdale leads Canada's malls in sales per square footage, according to the Retail Council of Canada.

However, the formula is unlikely to be duplicated at many Canadian malls.

Those in smaller cities can ill-afford to adopt the same strategy as they're unlikely to attract the likes of Nordstrom or other luxury retailers, said Winder.

They've been left with a string of anchor tenant vacancies, notably from the abrupt departure of Target (TGT.N) in 2015 and most recently, the failure of Sears Canada.

Anchor tenants are probably a fixture of the past, said Begic, but that doesn't mean malls will follow the same fate.

He anticipates malls in smaller cities will replace anchors with multiple, smaller tenants featuring the type of experiences their customers want.

Indigo Books & Music Inc., with its cafes, book clubs and children's toy area, is one example of a retailer that thinks beyond products to offer an in-store experience.

But there aren't many companies that are both flourishing and looking for mall space. Successful retailers, like Costco (COST.O), Walmart, Winners and others, tend to stay away from traditional malls, Winder said.

Some real estate owners are pushing to turn malls into more mixed-use space in smaller malls as they turn to alternatives like restaurants, dentist offices, gyms and even condos to fill the void.